The musical upsurge of the uncompromisingly expressive sibling duo, Brick and Lace, commanded the attention of millions as they released their blockbuster single Love is Wicked on Akon?s Kon Live Distribution and Geffen Record Label last year. The infectious dancehall beats mixed with the smoothness of R&B has produced a unique semi-urban sound that only they can perfect. Tickets are available now at Jumbie’s, St.Lawrence Gap; plus both 4 Play Deli and Mix 96.9 FM at Sheraton Mall…. Also available are VIP all inclusive tickets; which means eats and drinks included.

Born and raised predominantly in Kingston, the video vixens Nialah and Nyanda Thorbourne were destined to have a career in music as their mother sang in a choir and their father was a professional gospel musician. Not surprisingly their first few performances were in church. However their pursuit of gospel music was not a serious one as they confess that their influence came from ?Whitney Houston to Bob Marley to more contemporary acts such as TLC and Mary J.Blige mixed with dancehall?

The stylistically edgy Nyanda and versatile vocalist Nailah create distinctive melodic sounds with a hybrid effect that they so eloquently deliver at each performance. Their dynamic performances have made a lasting impression as they received the Jamaica Academy Awards for Best Performance by Group /Duo. Their lyrical chops, which have been honed by their experience with writing songs with the likes of Janet Jackson, Parish Hilton, Nicole Scherzinger (of the Pussy Cat Dolls) as well as, writing/co-writing all the songs on their album, are evidence of their composing prowess.

Their savvy compositions are accentuated by colourful and energetic videos. Their video Love is Wicked got over 4.7 million views in only seven months and peaked at number four on both Tempo and RE TV and number six on Hype TV?s Video Countdowns. It is no doubt that they received four awards at the recently staged Youth View Awards. 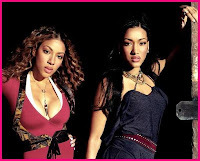 These include, Local Music Video of the Year, Chart Topping Song of the Year for the hot single Love is Wicked, the Young Hot and Hype Award and Favourite Group/Duo of the Year.

Love is Wicked also received over 430,000 spins on MySpace and peaked at number 5 on Richie B?s countdown having spent 14 weeks in the top 20 music countdown. The addictive sounds of Brick and Lace have gotten 350,000 spins on Imeem surpassing Nelly Furtado?s most popular single by over 190,000 spins. When asked about the success of the single and album a very humble yet confident Nialah answers ?I truly feel like it?s our time? to which Nyanda affirmatively nods.

Their edgy yet dainty outlook has earned them multiple performances as co-headliners in Nigeria and Uganda and headliners on multiple shows in the Caribbean. However they still make time to effect positive change in Jamaican students through the RE TV High School Tour which is viewed by Japanese fans via MTV. They are currently en route to Africa to perform once again in Nigeria and Tanzania. They will then leave for Finland in April while preparing for their US Tour in summer 2008.

Brick and Lace promises to continue to intensify their efforts to produce good music and attract vast audiences worldwide through the legacy they have received from their Jamaican roots. Thus staying true to their Excellence in Music and Entertainment Award, as Breakthrough Artistes of the Year.