Barbados branch of US Embassy enables video group to trace life of US Statesman from his hometown – Nevis!

President of a United Sates based production company Manifold Production Inc. Mr. Michael Park and his wife Gina, spent a day in Nevis on a fact finding mission earlier this week in preparation for a documentary on the early life of Alexander Hamilton, who was born in Nevis and spent his formative years on the island.

In an interview with the Department of Information, Mr. Park explained that the 90 minute documentary would be filmed in 2009 and aired on Public Broadcast Service (PBS) in 2010. 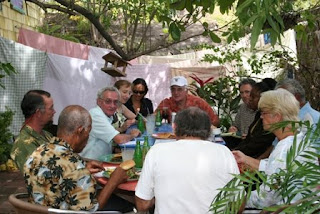 ?We are making a 90 minute documentary about Hamilton for PBS and as part of the documentary we want to talk about his formative years in Nevis. It was here the first years of his life that he became educated that the foundations of his brilliant career were laid and we are looking to find a way to put that in a documentary. So we are here exploring the island, looking for scenes that would reveal what Hamilton?s life in Nevis was like. It will be filmed next year and maybe shown the year after.

?We have various people here helping us we brought over from St. Croix, plus we are meeting other experts here on Nevis who also know other aspects of Hamilton?s life on Nevis. We are trying to brainstorm and come up with ideas for scenes so we gathered together a group of different kinds of experts in order for people to help us figure out what to film,? he said.
The documentary follows a previous documentary by PBS host Mr. Richard Brookhiser who also wrote a book on George Washington and another on Alexander Hamilton.

Mr. Park was of the view that Mr. Hamilton was an unappreciated and under celebrated founding father and the time had come to get information about him to a broad section of the American public.
?We have always felt that Alexander Hamilton was an underappreciated, under celebrated founding father, perhaps because he was not president but in a lot of ways he was as influential as many people who were president in establishing the economic system of the country, in justifying the constitution in the Federus Papers, in helping George Washington win the revolutionary war so we would like to celebrate him, he is under appreciated and this is sort of a chance to get information about him to a broad American public,? he said. 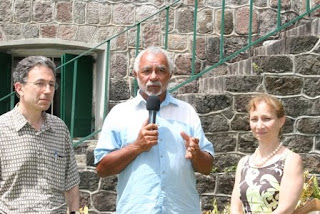 Meantime, Mr. John Guilbert Executive Director of the Nevis Historical and Conservation Society (NHCS) who formed part of the local team, regarded the upcoming documentary as something that would complement the work the Society had embarked on at the Mr. Hamilton?s birthplace, now the Museum of Nevis History, in Charlestown.
?It is something to look forward to on PBS in the very near future. This is a great beginning or continuation of what we have already put in place here with our new exhibit that we installed on January 11. 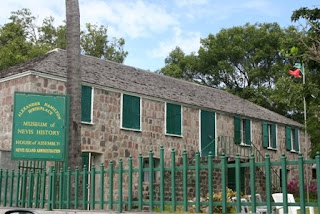 ?We are kind of taking it to the next level of looking at procuring a location downtown to create a historical centre for all Nevisians and this is going to be a part of that whole process and I think that what they are doing enhances what we are trying to do here on Nevis,? he said.
The NHCS had launched the exhibit entitled ?Alexander Hamilton: The Man Who Made Modern America? at the Museum of Nevis History in January 2008. The exhibit which was a duplicate of an exhibit that was at the time traveling to libraries across the United States was made possible through a US $40,000 grant from the United States Embassy in Bridgetown, Barbados.