Barbadian Talent at Jamaica’s Carnival – Queen of Soca with pair of Bajan guys: Rose between 2 thorns?

Every Easter we get vex that Trinidad sends artistes here for Calypso Spektakula, but Jamaica carries it one step further – they disregard Easter and welcome Bajans with open arms for their event!

It seems the Jamaicans realise what most other so-called Christians do not… Lent is a man-made season, not to be found in the Bible, it was invented by the Holy Roman Empire to assuage the fishing industry. Carne Vales means “Do away with Beef,” but again in Lent’s observation, the original guidelines said nothing about music nor dance! So excuse me as I wuk-up to good kaiso and munch on an all-beef roti!

Meanwhile, this is what the Observer says about our Alison Hinds, but it seems they change she name?

Caribbean Soca royalty, in the form of Barbadian Soca Queen Alison Hines, Trinidad and Tobago’s Destra Garcia and Atlantik and Jamaica’s own Byron Lee and the Dragonaires will headline Supreme Ventures Carnival Countdown, on March 23 at Richmond Estate in St Ann.

Organisers have described the event as the biggest Carnival Countdown ever, and promise a spectacular show.

Hines, known for her scintillating performances which feature eye-popping dance moves and countless hits such as Faluma, Togetherness, DJ Ride, Iron Bazodee, and the international chart-topper Roll it Gyal should make socaphiles lose control when she takes the stage. 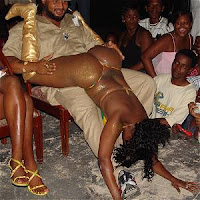 She won’t be alone, she has been assigned two proper “guards” who have their own following –

Biggie Irie, the man behind the soca hits Nah Goin Home, Band on Fire and Jump if Ya Jumpin, dominated Trinidad and Tobago Carnival. He even won the Groovy Soca Monarch Competition in spite of his nationality. Biggie Irie promises to capture the Jamaican revellers in the same fashion as he stole hearts in Trinidad and Barbados.

Peter Ram, though not new on the Carnival scene achieved notice with his hit songs, Woman by My Side and Pumpin.

So you see? No hue and cry over partying on a Maundy Saturday. Easter is for those who wish to observe it their way.