Over the weekend, the Barbados Arts Council’s Pelican Art Gallery was scene to a doubly poignant scene – it was tableau to the launch of “Anatomy Of A Scream,” a collection of poems tracking Lyric, a rape victim from the age of ten into adulthood; and it was also rather poignant in the sense that such a powerful catharsis was only witnessed by about 35 people – it speaks to the striking need of not just LITERACY on the Bajan mindscape, but an appreciation for the aesthetic also. 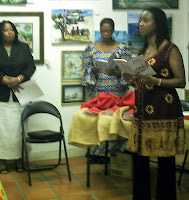 It is a pleasure to realise that CO Williams Electrical recognises its corporate citizenry via the Arts, by sponsoring the launch at Pelican for Anatomy Of A Scream.

The proceedings were hosted by Esther Phillips, with readings from Linda Deane, Jean Butcher-Lashley (the Head of the English Dept at BCC) and Ms Phillips – “Anatomy Of A Scream” can be found on sale at Days’ Book Store at Independence Square; all branches of the Cloister Bookstore; at the bookstores of both the UWI and the B’dos Community College in addition to the Book Place at Probyn Square near the Water Authority’s corporate headquarters.

The author did not deliver her own works, rather relayed her preface that did not end up with the book of verse, and these were her fascinating views expressed that night –

Anatomy is a song of violation ? violation of soul and of spirit.

Thematically therefore it is not a new song, but a new rendering that dares to plight its vocal chords in what for far too many women must sound an old and sadly familiar tune. 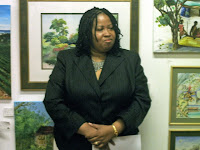 Yet in Anatomy Of A Scream rape not only figures as the ruthless dispatch of innocence. Indeed it simultaneously serves as a willful disfiguring of Thought and Word, for at ten years of age ?? a kitten began mewling / that had no name…? Lyric is then not only forced to live with all the consequence of an action for which she has no name and by extension no real vocalization; she is also forced to forgo the ownership of, and therefore the subsequent release from her pain. In this regard is the child doubly dispossessed and the importance of Word as Truth begins to work its way, perhaps solicitously at first, into the discourse.

Without Word, Thought and Deed also become, to a fault, insupportable. Lyric not only suffers in personal shame and silence, she must also suffer against a backdrop of social silence, further perpetuating the notion of the free-fall of the tree in the forest without human presence. To what extent then has the act of rape occurred? Such a question is the unfortunate tenet of denial, denial not only of the act but of the self, and self-involvement in general. No wonder:

??she passed from room to room

And then those nights

when earth was nothing

but vile welling of scars and silence??

Anatomy Of A Scream then reexamines the idea of childhood as a blissful state of existence by showing how the child in question is surreptitiously posited in an unthinkable, unspeakable place of anguish that, ironically, is rooted ? not in the much maligned city that is Brooklyn ? but:

??in the light and easy guile

of an island morning

Here the word guile alludes to the somewhat farcical quality of reminiscence, bringing into question the presumed ideality of any space and time, deliberately undermining ??the heart?s longing?? for its special island home, and for far simpler times, times that could only be deemed simple by default, or for lack of closer examination.

Structurally the story is couched within the poetic, which essentially means that for all its concern with ?truth? both the human subject (Lyric) and the subject matter (rape) have been romanticized to a degree insisted upon by the very use of language. 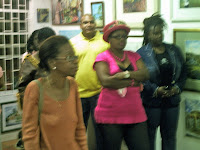 Hence the protagonist?s name is not lightly given. The older Lyric must confront the past if she is to come more fully into adulthood ? thereby reconciling the romantic (read beautiful) with the real (read violent), the idealized island with the vilified continent ? thereby undertaking a more conscious responsibility for the literal as well as the figurative transmutability of the self through language. Only then can she begin to experience the true and yet almost magical relief of song in the end.

If the two plot sequences ? the past rape scene and the more recent ?lesser? assault which takes place on board a Manhattan bound train ? seem to run concurrently, it is again because the past lives or is rudely revisited upon the present. There is also some concurrence between the physical train and the designated ?Train of Thought,? for although her ability to act is drastically inhibited Lyric is still able to employ a kind of mental scrutiny that serves to drive the piece.

Between the anatomical and the mechanical, the creative and the procreative, parallel lines appear that, conceptually, get their being from and are analogous to the same hollow birth canal. This canal (and later train tunnel) then becomes the potential birthplace of the new Lyric, a birthplace made accessible through the agency of the scream. The scream is then experienced within concentric circles that travel from the mind?s interior to the body?s to the train?s to the tunnel?s et cetera. However, because it is only within the confines of the written word that the scream exposes itself to the world, it is never fully resolved but is shown to be in dire want of verbal mediation. Even ??no no no on a piece of paper / a thousand times over?? proves ineffectual. Thus the so-called freedom of screaming (which translates into freedom of expression and truth in exposition) is bound by the very act that would perform its liberation. In this regard is language, in spite of all its possibility, made suspect; there is after all no effective word that transmits screaming. 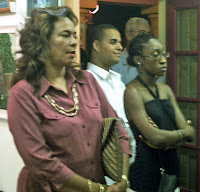 In Anatomy Of A Scream I hope I have begun to come to some small understanding of what appears to be two diametrically opposed axioms: that silence is of infinite measure, and (but) that utterance is no mean feat. Where does the creative impulse begin ? is it only authorized through suffering and, temper aside, do we scream as much in defiance of structural language norms as in articulation of pain and encroaching silence? Since so much of who we are is ?seen? in light of what we do or do not, can or cannot begin to say, I hope that the writing and subsequent reading of Anatomy Of A Scream will help to make language and its entails (reflection, self expression, self realization, hey, a simple conversation), all the more affordable.