Ancestral Echoes create a Spiritual Bond: Heru off the chain while remaining a savvy marketer, DJ Simmons gets political and crowd laps it up! 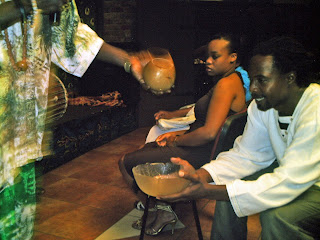 Close to MacGregor Street in Bridgetown, an old red-bricked building rests close by – this particular night in question its name is probably at its most apt, The Spirit Bond, and orishas were indeed invoked to give and receive tribute as ancestors to poets who lay down psychokinetic battles against racism and evil forces in a manner similar to a Jedi Knight wielding a lightsaber!

There was a traditional presentation of issuing the Libation, and an adorable little dreadlocked toddler orating a pledge against those that would uphold advancement based on pigmentation. 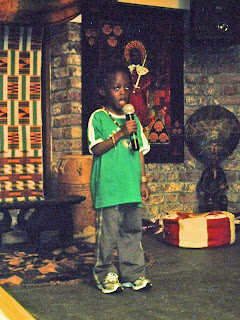 Oswald Jones drew the audience’s attention to him like how a lightbulb draws fireflies in the deep of the night, he regaled the folk with his Bronze winner from NIFCA 2007 “The Same Slave Ship,” where he does not paint a pretty picture for Caricom, he refers to the CSME as – Caribbean Society, Memory (is) Erased! 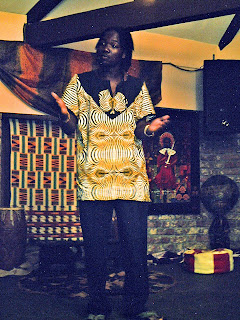 Kimberley Boyce alias Kimani Mocha Jade still sought love and energy from the crowd and gained some with her new composition, “Behold a Lady,” perhaps it was when she jumped the scalps off of everyone when she started the poem by baying and sustaining the note on the “O” in ‘behold‘? 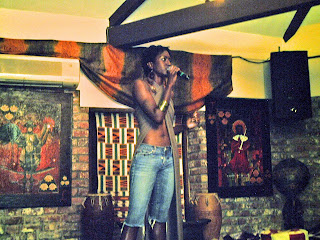 If Oswald trapped moths, then Adrian Green is the sly mongoose who outwits the mad cobra – his word-spells cast left people gasping for more and drooling in approval…

He started with his theme chant, “Ancestors,” and recalled “Mo’Juice,” his winning slam from Le Mot Juste where the audience bawled when he spoke of his melanin as a spiritual prophylactic against PTD’s or Psychologically Transmitted Diseases and keeping the memory shing befopre him how Bussa busted the plantocracy hundreds of years ago.

The appreciative crowd was diverse – there was an old white couple sitting in the back, ex-Cultural Ambassador and political nomad the Mighty Gabby were among those feeling the night’s activity. 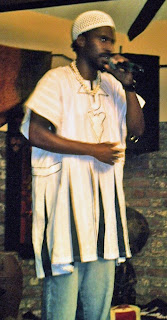 He altered “Dis Piece,” which got Silver at NIFCA 2007 to lash the Samuel Jackman Prescod Polytechnic over their disrespect to young brothers celebrating their Africanity while learning.

With “Rebel Diva,” he actually got Tamisha Hunte to conclude the poem rather than Adrian relaying the tribute to dusky feminine glory himself – she reminded the audience of significant black heroines as Nzinga from Angola, Harriet Tubman with her Underground Railroad and Nanny Grigg of the Maroons.

DJ Simmons showed his prowess that night as well, the young word-warrior shamed those who would deny their black heritage in his new version of “Black Is Bad?“, he had on a tam until he started to rant on the same SJPP issue, and then he ripped off the cap and let both barrels fly! 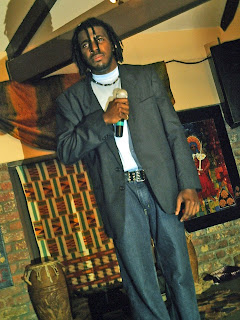 The poem then went back to regularly scheduled programming reminding everyone that black is best in martial arts, accounting and in a tuxedo for a fine event. He also recognised the importance of what image do you convey to children if a 2 year old can start to recite the chorus from a poem – he dedicated his Positive Energy to little Atiba. The whole exercise got massive crowd response!

Lion-Ra did not impress me too much with his interpretation of reggae nor his dress – no, not because it was African, but he used a device which was possibly set aside for decoration… Mid-length Dashikis have two side pockets, mainly for a pair of glasses and a pen or so. But Lion-Ra’s pockets were almost bursting! I have no idea what was in them but when he leapt around the stage and doing his presentation, they were most distracting like pendulous breasts in the wrong place!

Heru and Adrian had similar garments and they had NOTHING in their pockets as they entertained, it was far more pleasing to the eye and probably less constricting of their movements.

Lion-Ra’s tones and delivery reminded me of Nina Simone, but his tune “Black Goddess Of The Nile” left a lot to be desired if all he can think of when saying why he loves her is for the Goddess to give him child, as it rhymes with Nile? Please!

Heru – oh man – Heru, what can you say that probably has been said ten billion times by anyone with true appreciation for any, every and all cultures?

He has a true delivery that resonates of Africa, in that when he makes what is a significant point, he repeats it about three times. His words are like delicately hurled shuriken striking targets with silent and lethal precision, and a cadence that become what he wants – when he wants! Moreover, he understands the concept of Marketing… He does not lay out a full poem to you, if you really like it? He’ll tell you then go buy Volume So-And-So in the back during Intermission!

The tastes and views he expressed in the moments he shared will have a lasting effect on those who were blessed by attending… Heru twisted the concept of how no prophet gain honour in their own land by emphasising that all performers wherever they originated from are LOCAL to where they started! 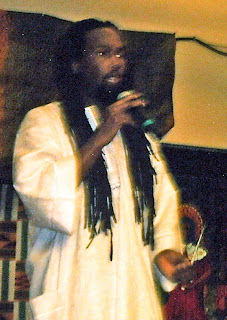 In his view, eventually Amenyama/Adrian Green will be credited as a National Hero in Barbados’ future!

Heru slaughtered the concept of Brand-Gear, it was the only time he said a “bad” word in his whole delivery when he deliberately chose to rhyme with Hilfiger. He also would stop and interrupt himself to do things like educate the audience, when he was dropping a rhyme that implied that Condoleezza Rice became a politico as she had no dates in High School… Then he paused and told you Exxon really named a tanker after her and asked you to look it up, see my links, I saved you the trouble!

Heru sees many black people as though they suffer from Stockholm Syndrome and instead of recognising their African nature, they choose to side with those who kept them down and tortured their parents.

Dreadlocks are African, his only comment on the same Hair-Vs-Polytechnic issue. He cited how Jamaicans may use English for words, but the syntax is African! He wants Afro-Caribbeans, Afro-Europeans, Afro-Americans and the entire diaspora to train their children to rule the world, AGAIN, in his view – everybody else is already in that way, otherwise why are we called the Human RACE? Someone has to get there FIRST, why not us?

Before I conclude this deep item, he asked for all who recorded the event to list the three most important books on being African… 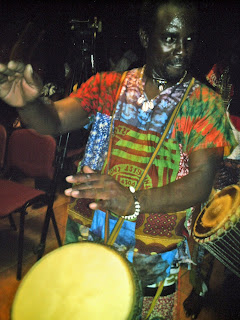