Where in Barbados has the best Roti? Which place do you avoid like the plague and why? Bajan Reporter looks at a number of eateries

Let’s say you’re a visitor, or you decide to have something other than a home cooked meal and you are trying a roti for the first time… What do you do? Read this article carefully, by the time you finish reading it, two of the dissed establishments may have put a contract on me, LOL!

A quick BTW for all visitors here – rotis are meant to be eaten in the pastry shell like a burrito, please, don’t skin it back and add hotsauce or ketchup – no matter how awful it is there are roti condiments and we’ll get into that as the review progresses…

I can do like Pull-Push and and hit one of those IANA… (I Am Not A – ) disclaimers, but I do not see the need, everyone must eat and if anything? Everyone has the right to assess what’s best for them!

I am looking at no less than five places, most have been attended more than once for an accurate assessment – if not, it will be explained why.

Worst and first up is Curry King in Wildey, went there once and the experience was such that I really don’t feel like returning. This tale may seem racial in relating it, but I am trusting that most folk with brains will understand what I am trying to say – they had a young Indian girl as a cashier…

I saw they had green banana and so I asked her if there’s any saltfish, was told no – I can’t hack green banana unless souse or saltfish is nearby so I thanked her for that tidbit and selected an all-beef roti and please put kuchela in it…

“WHAT’S THAT?” was put to me in total shock, I mean how do you NOT know what that is? She then added if I wanted achar, but I emphasised kuchela and it was the black manager who promised to buy some as I was the 4th person to ask for it, he also seemed rather embarrassed that the girl had no idea what that essential spice was.

I saw the gal head to the kitchen to ask the older chefs what it was, and to my amazement they did not know either – to me, it’s like if a Scotsperson did not know what haggis is made of, y’know?

But it eventually dawned on me from the way they spoke that these ppl are true Bajans – not Hindus nor Indians, but ppl probably more Bajan than I am and therefore I was the one who spoke the strange tongue.

It was still unsettling, but this was not why I wouldn’t bother heading back to Curry King, it is due to the quality of their rotis!

When I sat down to this thing from Curry King, the meat was soft yes, BUT NO FLAVOUR! There was this yellow watery fluid that was insinuating to be some relative of gravy and the dough was waxy and lifeless. 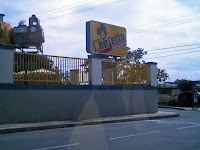 Chefette is fourth in the ranks – nearly nine dollars for a roti that can fit easily in the palm of your hand. The flavour is inconsistent. Sometimes it is bland, other occasions it can be too peppery (as in black pepper) and far too few is it seasoned just right.

The pastry can either be too thick or so thin that if you breathe on it it will start to shred. Apart from that, unpleasant staff seem to be more prevalent than helpful and diligent workers.

Staff at Big John’s are always nice, but their rotis are not the same from when they started – originally, you had an option of either dhal or regular flour shells. Now, it is only flour pastry and the quality of that is what I consider to be limp paper. Also they use too much geera and it makes it bitter. So, they’re third, but first place is a tie and each for very good reasons…

IV Play Deli at Sheraton is great for so many qualifications – staff have excellent manners; you see what they’re putting in your roti; they use gloves; they’re generous in the proportions and you can basically create your own style of filling. Buy a drink along with it as lunch and it is a little over ten dollars and yet you are so full you can sometimes skip dinner!

Also tying at top spot is Indian Grill – Curry In a Hurry!

This popular eatery on Bay Street near the Yacht Club has a wide variety of roti… Pork; Lamb; Saltfish & Okra; Shrimp; Beef; Chicken or even Liver & Gizzards (my favorite)! The skin is always dhal, the service is rapid without loss of quality and if you eat there, they have a basin {Curry Wash-Up} for you to wash up before and after the meal.

The price depends on the style you crave – Shrimp is the most expensive at $14.95 Bds but Beef or Liver & Gizzard are the least expensive at $8.95, plus – when you done eat? You have to resist asking for a hammock for a piece of shuteye thereafter!