Received this detailed info from a Bajan-Trinidadian associate, is there anyone here in Bim interested? I know I am, for as much as I love Barbados; here is a little-known secret… I WAS BORN A TRINI IN PORT-OF-SPAIN, EH-EH, AND NOT ASHAMED OF IT EITHER! 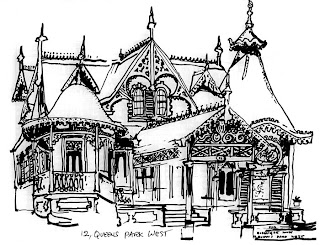 Over 20 years ago this house was in danger. A hastily organised group comprising John Newel Lewis, Claude Gilleaume, Megan Brown, Raul Poon Kong, Debra Reynolds and many other architects, artists and concerned Trinis pulled out all the stops and fought to save this house. We picketed successfully for days, specially at rush hour traffic, to save this house from being knocked down.

Now that I?m living in Barbados I can?t picket on the streets but I can picket by email and do hope that we can save this house from the fate of so many others. This affiliate received word there are new efforts to remove what some see as an old eyesore, and the alarm was raised by a prominent TT citizen –

There are so many things to be anxious or angry about in this country these days–crime, corruption, smelters, steel mills, dolphin-slaughter, traffic–that the fate of an old house may seem trivial.

But 12 Queen’s Park West, the Boissiere House, is not just an old house. It is a gorgeous example of the late Victorian gingerbread style that was once typical of Port of Spain. It is a major city landmark, familiar to tens–even hundreds–of thousands, and known to many simply as “the Gingerbread House”. It is the ultimate creole house, part Amerindian ajoupa, part French chateau, part Chinese pagoda, built with the sweat and labour of forgotten ancestors. It is a national architectural treasure.

It is also, I am afraid, in peril.

Why? Because after remaining in the Boissiere family for 104 years, since it was built in 1904, it is now being offered for sale, at a price of TT $50 million. Any private buyer willing to pay that will almost certainly bulldoze it and build an office block or posh condominiums to recoup their investment. We’ve seen this happen so many times before. Just in recent years we’ve lost the Lee House on St. Clair Avenue, Bagshot House in Maraval, the Union Club on Independence Square, Coblentz House in St. Ann’s, and numerous smaller gingerbread houses all over the city. Just a couple months ago, the big orange Pierre house on the Roxy roundabout disappeared, after years of neglect. The Trestrail Building on Broadway, with its cool, understated Corinthian columns, was bulldozed to build another yet office tower. The architect Edward Bowen designed the Boissiere House with its ornate fretwork — described 25 years ago by John Newel Lewis as “the finest remaining example in Trinidad” — its study in the form of a tiny Chinese pavilion, its painted glass windows, and its gesso-work ceilings. It is Bowen’s masterpiece, and one of the dozen or so most important buildings in Port of Spain, in the same league as the Magnificent Seven, Knowsley, the Red House, the two cathedrals, and the Cabildo. Though the house and land on Queen’s Park West are the property of a private owner, it is also, surely, after 104 years, part of our common heritage. But with all those other things to be anxious or angry about, all the ills and inequalities of our society, is it really worth getting upset about losing the Boissiere House? I think it is. Because this is a line in the sand, a test of how mercenary and philistine we really have become. Contemporary Trinidad seems hell-bent on destroying everything we have that is beautiful and authentic, usually in the name of the dollar. We knock down gorgeous old buildings, erase their history and stories and memories, and build air-conditioned Miami-boxes. We pave our green open spaces. We drown true Mas in floods of sequinned bikinis imported from China. The works of art in our National Museum are literally crumbling from neglect (when last did you go and look at them?). Most of our musicians can’t get airplay (when last did you hear jointpop on the radio?). At some point will we say, enough is enough?

Could this be that point?

So what might we do? There seems to be only one realistic option: persuade the government that the Boissiere House is a crucial and irreplaceable part of our national heritage, that it must be bought by the state, restored, and put to appropriate public use.

$50 million is a lot of money. But we can afford to build skyscrapers – ugly ones – and prime ministerial palaces, and buy droning blimps, and build white elephant cricket stadiums, and our prime minister can afford to hire a crack team of private security agents. We have, frankly, more money than we know what to do with.Can we afford to save this one, beautiful old house – just because it is beautiful, because it makes our increasingly ugly city a little easier to live in? Because it brings a moment of pleasure to everyone jogging round the Savannah or stuck in traffic on Queen’s Park West? Because it represents our history, and our collective memory, and that is something no one can put a price on? I am going to do all I can. Other concerned citizens are already working quietly to save the Boissiere House. I think it’s time to stop being quiet. If you want to help, here are some simple, practical suggestions:

– Tell people the Boissiere House is in danger.

– Forward this email to everyone you know who might be concerned.
– Write a letter to the editor.
– If you work in the media, try to get your newspaper or station to run a story.
– If you have a blog, write something there.
– If you own a camera, stop by 12 Queen’s Park West, take some photos, post them online, or just forward them to friends.
– If you know someone in the Ministry of Culture, tell them you’re concerned and ask them to speak to their superior about saving the Boissiere House.
– Call Town and Country and urge them not to give planning permission for a new building on this site.
– Call the National Trust and ask what you can do to help.
– If you know a politician of any party on any level, tell them you’re concerned and ask them to talk to their party leadership.
– Read about the history of the house in Olga Mavrogordato’s book Voices in the Street, or John Newel Lewis’s book Ajoupa, and share this with others.
– Come to the event we’re planning at Alice Yard next week Friday to discuss why this and other historic buildings are worth preserving.
– Write me back and tell me you’d like to be on a mailing list to hear about further efforts. A website is on its way, also an online petition.
– If you know a member of the Boissiere family that owns the house, ask them to consider putting a no-demolition clause in the sale contract, or to negotiate with the government to arrive at a reasonable sale price that might make it easier to save the building.
– And if you are a multi-millionaire property developer, consider doing something truly enlightened: buy the house, pay to have it restored, put it to some use that will not damage its fabric.

Finally: ask yourself if you’d be willing to stand in the hot sun with a placard, if it comes to that.