Nevisian Minister of Communications, Works and Public Utilities – Carlisle Powell, said the second phase of the drilling for geothermal energy represented a another thrust for the Nevis Island Administration (NIA) as it sought to reduce the cost of living for the people of the island.
Minister Powell spoke at the commencement of the second phase drilling operation at the West Indies Power (WIP) Nevis 1 drill site located at Spring Hill, St. James Parish, moments before Minister Robelto Hector released the lever to commence the drilling operation. 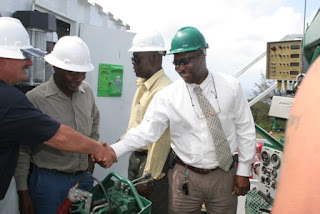 ?I am delighted to be a part of the start of the second phase of the drilling for geothermal energy. They [WIP] have spent a lot of money [and] done a tremendous amount of work in getting to this stage. We [NIA] are interested in not only getting geothermal power and the ability to harness the geothermal power but the ability to offer to the domestic and commercial consumers in Nevis, power at a reduced cost which for us [NIA] would signal a reduction in the cost of living for the average person in Nevis,? he said.
Mr. Powell said that various studies had shown one identical finding that indicated the island had great potential for geothermal energy and it was a matter of drilling in the right place to harness these energies and be able to produce it. 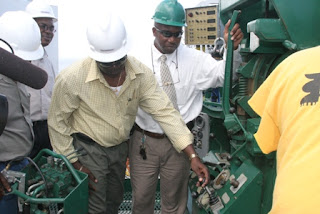 The Minister also disclosed that the NIA had looked at and began preparations to accommodate new industries and companies who wished to take advantage of the cheaper energy.
Meanwhile, General Manager of West Indies Power Nevis Limited, Mr. Rawlinson Isaac said the company was confident that it would find the geothermal resource and all works pointed specifically to its availability potential on the island.
He said WIP Nevis Limited was vigorously pursuing the location of the geothermal resource and had employed some local employees to compliment the Therma Source drilling team which was moving towards the development of another phase of the project. 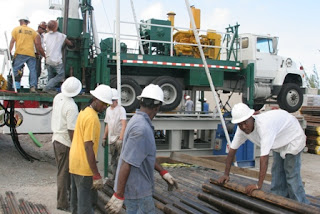 Head of the Therma Source drill team, Mr. Bobby Kingsley explained the drilling process and said collecting water samples and temperature gradients would allow them knowledge of the location of the reservoir which held the volume of water and the heat required for testing. He said the drill team would be installing drill rods and clean out the pre-drilled hole by Trinidad based drilling company Lennox. 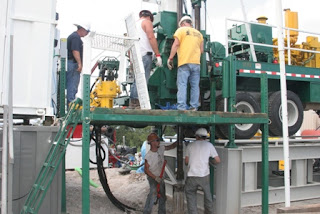 An on location office set up with a computerised control system allows the team to monitor the depth as well as the fluids coming in and out of the hole, the pressures that exist there and other critical information.