Twenty-three Kevlar bullet-proof vests were handed over to Premier of Nevis the Hon. Joseph Parry, by the Nevis Anti-Crime Community Initiative Committee (NACCIC) earlier this week, at an official handing over ceremony which took place at the courtyard of the Alexandra Hamilton Museum and Nevis Legislative Chambers in Charlestown.

In accepting the gift on behalf of the Nevis Division of the Royal St. Christopher and Nevis Police Force, the Premier said that the move was indicative of the Nevis Island Administration?s seriousness to support the police on the island and he thanked the members of the NACCIC. 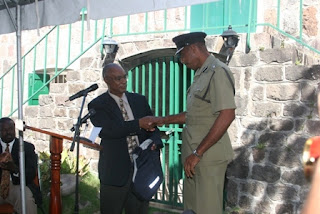 ?Superintendent Seabrookes, I am very happy Sir to hand over [these] bullet proof vests. It?s the first time that I am holding one in my life but I understand that it can soften blows and cutlass chops etc, so it?s a multipurpose vest. It is my pleasure to give this to you Sir as a token of all the other vests that will be given to the police. May, as Mr. McMullan says, that you may not have to use it but knowing what is happening now, I am sure they will be [used]. This is an indication of our serious support for you and all the police officers on the island of Nevis.

?I must first thank the Committee for providing the 23 bulletproof vests. We have been trying for some time now to get vests for the police here on the island of Nevis. I am very happy to hear that there will be another 20 coming. I appreciate all the assistance that has been given to the police and we hope that we continue to give assistance,? he said.

At the time of the donation, the Nevis Police Division had three bullet proof vests assigned to it.

While he accepted the much needed equipment on behalf of the Nevis Division, Acting Superintendent Samuel Seabrookes said it was a sense of pride for him to have accepted the vests from the Premier of Nevis and the NACCIC.

He gave his assurance to the Premier and the Committee that the vests would be utilised to the fullest and that the police officers would take care of them while they awaited the additional 20 vests. 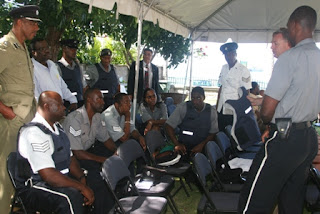 Chairperson of the group, Mr. Steven Walwyn, outlined how group member Mr. Dan McMullan a seven-year veteran of the Royal Canadian Mounted Police (RCMP) had sourced the equipment and highlighted the initiatives undertaken by the committee.

Mr. McMullan noted that the Committee had met periodically with the high command of the Nevis Division to identify areas of need and had also been involved in acquiring other equipment and training for the officers.

Mr. McMullan, who also demonstrated the use of the equipment to the officers, said he was delighted to assist. 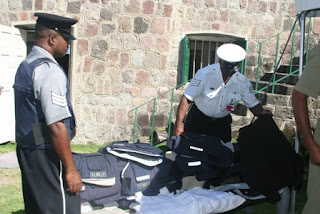 The Nevis Anti-Crime Community Initiative Committee which was formed last May had facilitated a Crime Symposium at the Four Seasons Resort on June 26, 2007. The group has since repainted reservoirs and other landmarks that had been defaced by graffiti and also presented the police with a set of weather resistant flashlights and other equipment.