Nevis Airport back to Level 5 – As fire tender reinstated

The Vance Amory International Airport in Newcastle will be back in full operation when the first American Airlines aircraft re commences flights into Nevis.
Nevis Air and Sea Port Authority (NASPA) Manager Mr. Spencer Hanley made the announcement shortly after an overseas technician assisted by local personnel completed repairs and gave the green light on the fire tender which had been out of commission in late January. 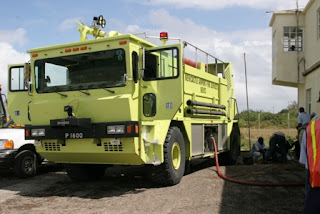 ?It is my pleasure to tell you the fire truck at Vance W. Amory International Airport was returned to full service and I am happy to announce that everything is working fine,? he said.
Mr. Hanley noted that due to the broken fire tender, the Vance W. Amory International had been subject to a down grade in its level of from a Level 5 to a Level 3 and therefore could only facilitate smaller aircraft.
Notwithstanding, since the NASPA general Manager received the nod of approval from the mechanics, he had notified American Airline personnel in St. Kitts who had indicated that the late afternoon American Eagle flight would be routed to Nevis. 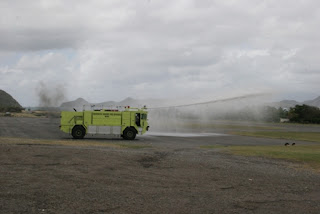 He also indicated that the fire tender now had a completely rebuilt transmission with several brand new parts within the engine which was believed would hold for some time but plans were already afoot to source another truck.
?The truck now has a completely re built transmission and lots of brand new parts within the body of the engine so we believe that this truck will hold up for some time. We hope and pray that we never have to repeat this.?I just want to let you know that a fire truck is not an item that you walk into a show room and you pick up, it is custom built and takes approximately six to eight months to get completed so we already begaon the process of sourcing another truck so we’ll never find ourselves in that position again,? the officer explained. 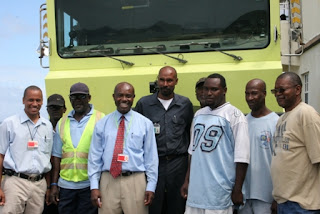 Mr. Hanley took the opportunity to thank all the personnel who he said worked tirelessly through the crisis to return the Airport to its fully functional status.