First of all I want to let Akilah Bishop at the Barbados Advocate know it was okay that she used some of my questions in her Friday article. Since she got the answers kind of mixed up then it’s no true big deal as I still have the real deal. She even went so far as to list two of my questions as coming from different men when both were me, oh dear, didn’t know I was schizophrenic! 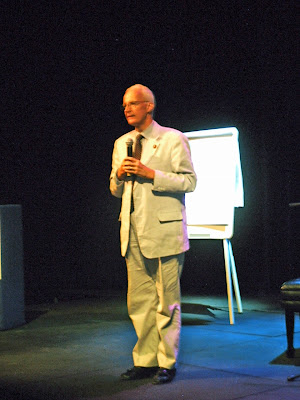 Mr Samuel Brock, former Deputy Head of the Kinshasa Mission in Congo, was the guest lecturer at the Errol Barrow Centre for Creative Imagination, married to a Martiniquan and proud father to four highly accomplished girls. He has not only African but Caribbean experiences – not just by way of marriage but having spent time in Jamaica on the behalf of Spain. 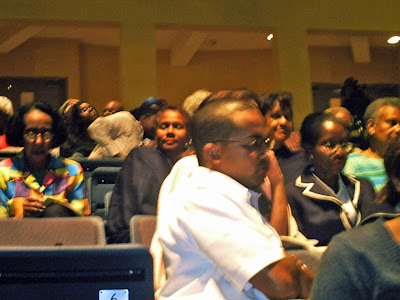 I believe when Mr Brock saw the large crowd of mainly Afro-Bajans and very few Caucasians there that night (it was very well attended), he may heave been hesitant in approaching the topic of Negro Spirituals, but I believe he gave the topic the correct amount of respect and reverence it deserves to forge ahead bravely – minefields or not.

His lecture was rather dry at first – hearkening back to Jamestown in 1607, which is probably better known among the audience. He then made a point how Ouidah used to be a Portuguese enclave in the 17th century, and there was a huge banyan tree at their port which the sold off slaves would march around seven times to ensure their souls returned to Africa.

In the US, Annapolis, Charleston & Savannah were the main auction sites for this evil trade, I asked Mr Brock if it wasn’t due to the North being more industrialised and the South as an agrarian society created a disparity in what each needed for manual labour, i.e. North had machines and required servants not so much as slaves whereas the south had cotton as part of their main crop which needed masses of people to cultivate.

This he readily agreed upon and elaborated that the Mason-Dixon line was named after two British cartographers hired to define both the North and South; the Ohio River is the main demarcation to separate the two areas. 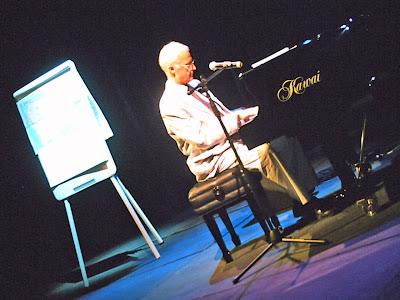 Swing Low Sweet Chariot depending on its tempo is either a funeral dirge or a boisterous challenge to an unaware master that freedom is soon to hand; it was also used as a means of timing the labour while working a row, this eventually led to the Call And Response system –

Mr Brock then elaborated how Africans and those of that descent tend to use a scale for music that is pentatonic – which is based on a five-note scale. Whereas Europeans tended to favour a heptatonic scale or seven-note basis.

To his knowledge, there are not many spirituals with actual authors (although there are claims that the same Swing Low has an actual author), and some songs could have been transferred via trading of slaves with other Plantations. 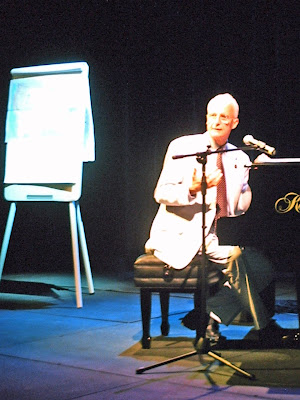 The US envoy then demonstrated how Amazing Grace, written by a former slave trader seemed to have been based on the pentatonic scale – it could have been inspired by the hearing the singing of the very ppl that John Newton victimised and traumatised.

Amazing grace
How sweet the sound
That saved a wretch like me
I once was lost, but now I’m found
Was blind, but now I see

My God, my Savior has ransomed me
And like a flood His mercy reigns Unending love,


The story of Moses resonated tremendously with the slave population, here is a prophet of an enslaved society demanding freedom and when no negotiations were forthcoming horrible vengeance was visited on the perpetrators. Therefore it was only natural that they believed a similar fate was in store for those that that disrupted their lives. As a result a favorite tune was Go Down Moses –

So the God seyeth: go down, moses

He made all pharaoes understand…

I must say that in text, seeing all the lyrics, I am fully aware that the readers out there can skip past those parts, but in an actual programme, more analysis from Mr Brock would have been welcome but he used slices of the time by playing whole songs when I really wanted to hear his opinion on the situation.

When Brock pointed out that these same tunes were allegories for allowing other members of the Underground Railroad to communicate, it was very clear that the tune Honor was another coded message in the war against terrorism of that period.

Like Swing Low Sweet Chariot, was hinting at moving across a great body of water like crossing the Ohio River to the North where the slaves thought safety and respect existed.

It also spoke of lighting a candle – whether referring to the five foolish virgins and the five wives or lighting a lantern to signal I am ready to cross like Kunta Kinte did in Roots.

The American diplomat also pointed out that the pentatonic code played a major part in the composition of George and Ira Gershwin’s Porgy & Bess.

Then a member of the audience asked if Mr Brock saw any experiences while on duty in Africa that led him to believe the stories about spirituals were true? The reply given is that Africans consider spirituals as part of their own heritage. Which for him was no big surprise as syncopation and rythm play a major part of African Culture. 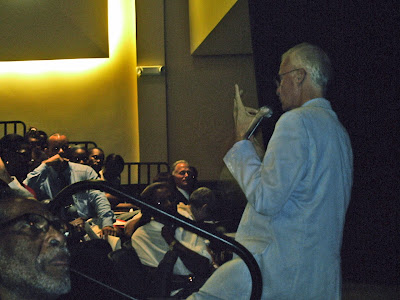 Towards the end of the lecture there was a question posed if Negro Spirituals are classical music, and the diplomat answered unequivocally yes, but a young female student from the Barbados Community College actually disputed this!

The contention actually enraged a black lady from Louisiana (her hubby is a white dude from California, they were very sweet actually and very lovey-dovey) who physically turned her back away from where the girl was sitting. The whole audience was in an uproar, really.

The teenaged gal did not view spirituals as being of a Classic nature since Mozart with a piano is classical, this seemed to be class-ISM more than anything else – like when Louis Armstrong said bebop from John Birks “Dizzy” Gillespie was not Jazz.

I asked the girl about it and called her out on it after Mr Brock concluded the lecture, and her excuse is no one knows what the original structure was hundreds of years ago as it was not written down!

Was it not passed on, I asked, like a griot? Do you not think 50 cent in 200 years will be considered as Classical Gangsta Hiphop? She maintained in her view there must be a record.

I sighed and headed home wondering how she would have coped with the griots from Roots when Alex Haley went to Africa and traced his family back from 200 years, they had no certificates – instead, only a spoken history tracing back epochs.