Mo’Juice – gave voice to talents both old and new at Cavans Lane – much to look out for! 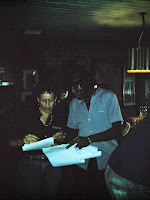 This is the most folk I have seen at Limelight Cafe for a spoken word event, there were like close to 200 people there! Enricco Bohne and Le Mot Juste, struck oil in their latest edition – Mo’Juice!

Could it be folks who read this News-Blog were anxious to learn of the level of cussing? Then they may have been a bit disappointed – while profanity was apparent, it was used as an adjunct or even a counterpoint for what many a young poet was relating to the crowd – like a dash of salt, pepper or hotsauce then served to the eagerly awaiting folk; who lapped it up with barely a gasp. 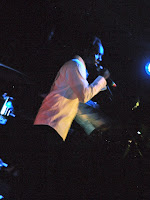 Kashi Browne was there in all his glory as the emcee for the night and the audience was never at a loss for eye and ear candy… Masala kept the groove going between slams.

Selena Thompson is a lady to watch out for – she conveys erotica far better than Mr Browne and the competitors and the crowd thought so too! What was amazing, is that she read his own works!!! This was a section where finalists had to read another poet’s work and you had to guess who it was based on the delivery style, clever and distracting at the same time. This is the first time Selena’s really put her poetry up for scrutiny, usually she enters NIFCA‘S Culinary Arts as she’s a chef. 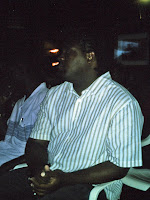 Colette Sealy explored the intricacies of her interracial relationship, this white guy makes her feel like a Queen, desires her like a starving man appreciates a meal and black men she dated before treated her as if she less than corn curls {Ed’s Note: Not her words, my interpretation of her untitled work} and so confusion led to rage in her very intriguing analysis. 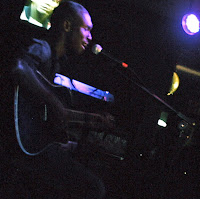 24 year old (Barbados’ youngest ever) Senator Damien Griffith was there along with his controversial plaits, at least controversial to those who object. That’s like saying Alfred Taylor was right about Ingrid Quarless at the then Holiday Inn, or that Sir Dwight Venner should crop his Afro or Randolph Fields should be revered for his statement that Rastas should be beaten, jailed and cropped.

I don’t care what anyone says – if you don’t like them? Don’t look at them and accept you are a closet Colonialist! In Africa, they are considered the height of masculinity. I wear an ear-stud, ppl have asked my boss if he don’t mind – he says once it don’t stop me from doing my work. Okay, enough soapbox…

Matthew Murrell was very good, but what really had folks is that there were two Bob Marley birthday tributes that nite… One from “O” or Omar, also a chef like Selena, who talked of a spliff the size of an Oh-Henry bar, while UK transplant Simon Murray had Reparation Song which incorporated Wilberforce with Redemption Song – great concept but don’t give up your day job, your singing voice needs a major overhaul!

Rochelle Christie, another guest from away, was both funny and sad – in her opening remarks she said she’ll be quick as Immigration is outside waiting for her (she’s Guyanese), but her poem tracked a little girl from 5 to 20 starting as a little beauty queen innocent to a molested stepdaughter then a prostitute at her mother’s orders and becoming a mother by her 2nd decade when all she wanted was to study and become a good writer or doctor. Very powerful and made my eyes mist over. 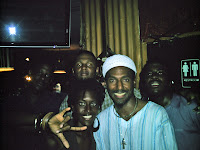 There was an improv segment where finalists had to think of a slam from a phrase and relay it in 60 seconds and Levi King, star of the Kite Flyer soared with “My X,” he treated it both as a vote and a former mate.

Jamal Bovell bombed when doing his own set piece about urging men to respect women yet shined when faced with the phrase “Til Wednesday,” amazingly DJ Simmons got the phrase “Don’t Lemme Choke” and that is exactly what happened – but we all know who won, right? 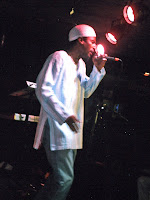 Adrian Green burst crutch left, right and center when he pulled the phrase “Mo’Juice” and slammed it all over the place from sexuality without gratuitous explicitness, to juice as in power for delivering a poem or power as to those in Office. The crowd went wild! This is his 3rd victory. Carnia is not a new group, they are an offshoot of Garlex – it’s Amanda Hoyos and her hubby Alex Cummins. Both had originals; Amanda had a beautiful ballad called “Thief” which is about time, 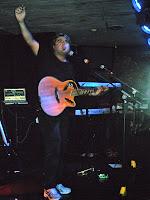 that reminded me of Jim Croce lyrically and thematically.

Alex did a tribute to late friend of his who succumbed to heroin. In that sense it was like James Taylor’s Fire & Rain, but its delivery was similar to Hootie & The Blowfish while the song itself reminded me of their “Let Her Cry“

The surprise of the night was the return of Alan Sheppard with songs made big in the days of Spice – Aware Africa, Bob‘s Song (Since 1993, this was one of the best tributes for the late Robt. Nesta Marley) and Give Them Freedom, with genuine African syncopated rythms playing as the accompaniment. 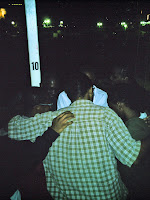 It moved the audience to start chanting, bonding and dancing like Zulu or any other African society. Will the rest of that one-time hot group take the hint? Or will fears of being outshone by their successful lead vocalist resurface?