January was the first time I visited Lancaster House, and now in February so much more has been done! Most of the walls rather than being green alone as before, now some are in shades of ochre or a rich maroon bordering on vermilion, all at the direction of their creative curator Roger Chubb.

The west coast establishment is also currently hosting yoga classes on Wednesday evenings, there are plans to expand the viewing space into what will be called “The Back Stairs Gallery” and there’s an artist in residence now and she’ll be exhibiting between the end of April and the start of May – check their website for more! 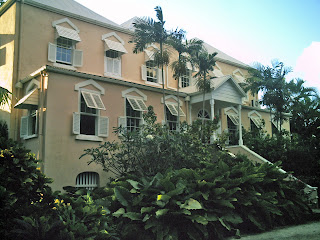 “Looking at a painting is like taking a trip – When I look at each of my paintings, I can remember the sight, the taste, the smell, every detail of my life on the day it was painted. I would say it’s more like d?j? vu.” – Boscoe Holder

The real joy at the moment is the fund-raising tribute featuring previously unseen works of Boscoe Holder, the funds of which go towards the continued development of the Barbados Community Foundation.

Let’s start with the androgynousness of Pierrot, it’s a powerful look at the theatre aspect of Boscoe, a true renaissance man – pianist, dancer, artist, teacher. 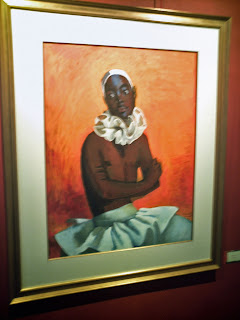 Boscoe has rubbed elbows with the likes of Josephine Baker and trod the streets of Nice, New York and London. Yet Pierrot also bears a striking resemblance to a younger version of his still-living brother, Geoffrey Holder, a noted actor and voiceover artiste. 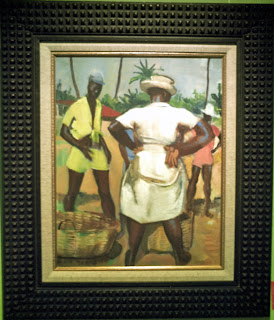 Boscoe adores the sensuality of the black Caribbean woman be she clothed, naked or somewhere in between. In Market Lady, Boscoe performs a dual service – he captures the sensuality of a full-figured woman’s derri?re, but in the sharp angularity of that akimbo stance, he captures the aggressive nature of these ladies who have to out-piranha other women for sales of produce from day to day. 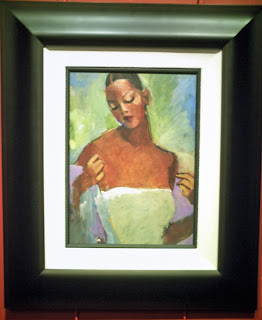 Then there is the hint of pleasure with the younger lady just barely touching her outfit in Posed as though she is wondering whether or not to disrobe. With Red Peignoir, you can sense the subject’s bored amusement at such close scrutiny as in, “Wait, bosie, you en’t finish yet?“ 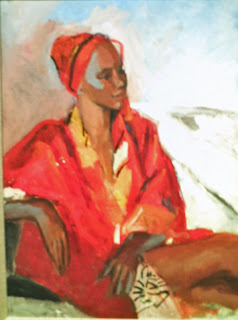 Not everything is analysis of the female form, Boscoe also liked to study human nature in a Caribbean manner from both near or far… 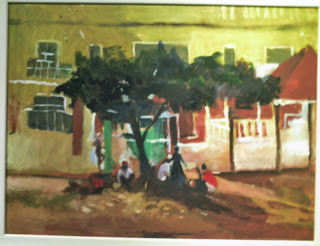 In Liming it appears to look at the banter of folks in a relaxed state, while Steel Pans follows his mostly Trini traditions (Hey, last name Holder? He has a bit of Bajan in him, then!) in observing the melodies emanating from the last invented instrument of the 20th Century. The frames are also delicious, done by Chaka Rodney of Fine Art Frames. They have texture and attitude which compliment the paintings thoroughly. 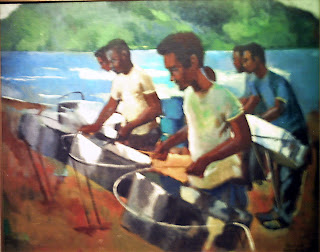 This show is for serious investors, if you plan to hold a Holder the least you can expect to set forth is three grand – US of A… Grab your chequebook, because the cause is worth it! The exhibition of “new” canvasses continues until March 26th. Here’s a bit more on where the proceeds are going and why…

The Barbados Community Foundation was formed nine years ago, and is currently chaired by real estate magnate Paul Altman. 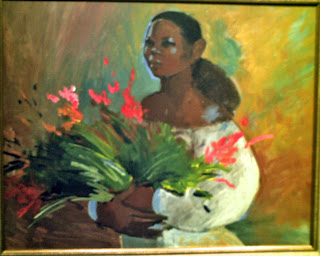 The trustees with their Chairman review on annual capacity individuals or organisations that may require assistance in various areas – e.g. Pinelands Creative Workshop or B’dos Council for the Disabled or The Hope-Martin Foundation which assists the Hope Sanctuary among hundreds of other Bajan NGO‘s.

Lancaster Great House is owned by Sir Martyn and Lady Arbib who are lifetime patrons of the BCF, with a donation made of half a million Bds.