The No Joke Entertainment and VP Records “Education is No Joke” School tour continued to blaze a trail last week with some of Jamaica’s top entertainers visiting their Alma Maters.

The main aim of the “Education Is No Joke” school tour is to sensitize students as to the importance of a good education and motivate them to adopt positive lifestyles. With the help of sponsors such as Arctic Ice, the tour has been reuniting some of Jamaica’s most popular artistes with their Alma Maters and the impact has been phenomenal.

International dancehall star and Jamaican recording artist Sean Paul, visited his former high school, Wolmer’s Boys recently and based on reports from students and teachers, the visit was a hit. 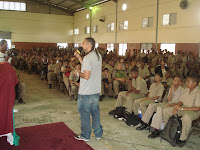 Sean Paul disembarked the Infinity Tours bus and received a good welcome from the Wolmer’s family; he focused his talk to the boys on the importance of a good education.

At Wolmer’s Sean Paul presented himself as a father figure instilled in the boys the importance of respecting each other. Students had numerous questions for the artiste and Sean answered them with maturity and showed his immense knowledge of the current issues affecting the students. 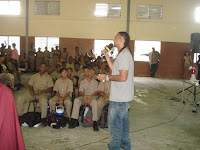 At Wolmer’s Sean maintained the theme of the Wysinco and Logostich sponsored “Education is No Joke” School Tour and emphasized that without a good education there can be no real success.

Sean Paul throughout his talk to the boys at Wolmer’s credited his success to the good foundation he received at Wolmer’s; he emphasized the importance of good values and politeness as keys to success.

To top off his visit to his old school, Sean Paul gave prizes to the most improved students, signed autographs and posed for pictures with some of his young fans.

A student from Wolmer’s expressed his gratitude in this way, “We are very happy that Sean Paul took time out to talk to us today. This shows us that he cares about his young fans and that he understands the importance of education”

The No Joke entertainment “Education is no Joke” School tour has over the past two weeks been bringing some of Jamaica’s best known role models who have maintained a positive image in the music to influence students in a positive way. 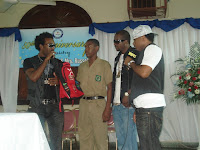 In this light the Cooyah and Hype TV supported tour co-opted the help of Voicemail to deliver their positive message to three schools. On Wednesday February 20 Craig visited his old school Jamaica College, O’Neil dropped by Kingston College and Kevin gave his talk at Calabar High.

Voicemail commended the boys of all three schools on their successes in academics and sports but maintained that this good trend must continue. 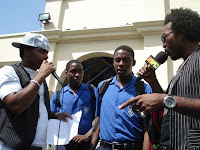 Voicemail also focused on the need for unity between all three schools and stated that recent incidents between students from the three schools were not positive and put the institutions in a bad light. They stated that even though all members of Voicemail were from different schools they came together to do something positive.

“We came together and created something positive even though we are all from three traditional rivals,“ O’Neil Edwards, Voicemail Member stated, “In the end it does not matter which school you are from, you still have work with people from different walks of life to be successful“

The Education is no Joke School ends this week with visits two schools from the corporate area. The tour over the past three weeks has been working hard to fulfil its mandate of bringing a positive message to the young fans of the music. The “Education is No Joke“ tour has also been able to lift the spirits of the students by facilitating the surprise visits of some of their favourite artistes and role models.

“The “Education is No Joke” school tour has been a tremendous success,“ Mario Lazarre, CEO No Joke Entertainment commented, “We have received a great response from the schools we have visited and so far we believe we have made a positive impact on the students. With the help of our sponsors who include Island Grill, Western Sports and All Signs we will be continuing the positive message as we feel this will uplift the student and make the school environment more wholesome.“