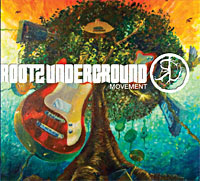 Hammer is the second video from their debut album ‘Movement‘ which is slated for an early March release.

The Hammer video was shot by Phase 3 Productions, produced by Shannon Hart and directed by Luciano Blotta. The video for Hammer is a symbol of the mindset and the message of Rootz Underground. Rootz Underground’s lyrics manifest self-realisation and self-actualisation, concepts that are depicted vividly in the video. Hammer’s video is a mixture of sharp images intertwined with silhouettes of creativity on the grungy background of a welding shop.

“The Hammer video shows how Rootz wants to use the music as a tool for upliftment,” Stevie G, Lead singer Rootz Underground emphasised, “We had a fun time making this one, it’s a different energy to the Victims video but is still positive and shows us in our natural state just vibing and making the music we love.”

The Hammer video is of a high quality with spot on editing by Luciano Blotta and Delano Forbes of Phase Three Productions. The video release coincides with the underground release of numerous copies of the ‘Movement‘ album which have already sold out.

The next project from Rootz Underground is the full release of their highly anticipated album ‘Movement‘. The album has been years in the making and manifests the passion and dedication of Rootz Underground.

“The ‘Movement‘ record represents a journey for us, from strumming a guitar with friends all the way to performing stages,” Charles, Rootz Underground Lead Guitarist declared, “‘Movement‘ is the development of the band with the guidance of our respected seniors in this realm of modern reggae on 19 tracks of passion“.