Recently, many Jamaicans may have heard of his recent arrest on the charge of arson. This comes out of an incident in Spanish Town where Lutan Fyah was accused of being involved. 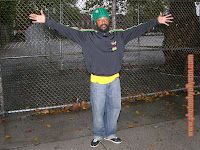 The reggae performer would like to state he’s innocent of all charges and find this conspiracy misleading and wanton. Lutan Fyah’s constantly contributed to the development of youths in Spanish Town and would never involved in such activities. Lutan Fyah symbolises positivity and upliftment of the people and the music.

2007 was a good year for Lutan Fyah, Indeed he was able to spread his message worldwide and bring reggae music to new peoples. By understanding his obligation to his fans, Jamaica and the music and would never under any circumstance manifest such evil behaviour.

The artiste vows to continue to give praises to his supporters for their continued faith in his music and he also looks forward to continuing the positive trend Lutan Fyah’s known for.