Barbados Film & Video Association: When Participatory Journalism can exceed its own boundaries

In the sequel to carry fwd the Barbadian Film and TV industries, a dramatic twist occurred where the recorder of events was ordered via popular acclamation to chair the proceedings.

In my view this lends itself to being a conflict of interest. It’s as if I was in charge of an entertainment NGO and ran an ad agency and also was involved in organising the machinery of a political entity which is in office. 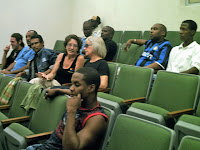 If in such a conundrum, to use the political juice to remove a rival music show so as to allow my own plans to reach fruition is dishonest and also at war with myself! I am not doing this, I also never said this has indeed happened – although it could – but being in such a tenuous spot does not sit well with me…

Now that this is clear, and I am sure if you agree you will not hesitate to make it known either! On with the show…

While participants from Wednesday 23rd Jan. ’08 were waiting for NCF personnel, opening remarks that Sat. 26 Jan. were made by Wayne Cezair – as he saw it, Jamaica and Trinidad are the correct m 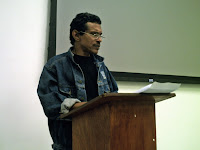 Wayne’s claim is that they are dynamic and active, and always have something in the can waiting for release. Barbados on the other hand barely has a pulse to indicate any life in this sector. It is accepted that Barbados has talent both in front and behind the camera who willing and able to get things going, but this cannot easily achieve reality if requisite training is not performed to ensure and hone all skills available here.

To accomplish this much requires an organised body to devise a means of generating revenue to access funding to acquire even these basic goals.

Once such a group is flesh and blood rather than theory then it has to be reviewed what standard to use as a benchmark – Wayne’s proposal is rather than accepting Hollywood as the ne plus ultra, use thee region itself not only as its own standard but to use all real and fantasised circumstances here as the basis of material for these DVD’s/programmes. 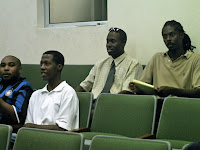 Specialities and fiscal rebates via Film Commissions are merely icing on the film and video cake of Barbados, those are immediate goals, where the focus must be more far-reaching by forming a Guild or Association to create a pan-Caribbean partnership.

This initial guideline was met with some approval, however, Jackie Curbishley pointed out that Bollywood is at least a century old and therefore a worthy model to emulate, don’t just limit an entity to within the Caribbean but consider foreign demographics too. 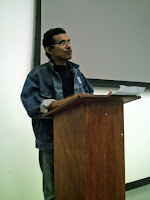 Bds, Cezair agreed that $50K is a logical target to aim for when seeking an investor.

Nala, a luminary in Barbadian cinematography, posed there is no Film industry here as there are no true film-makers in Barbados either. He has seen a similar rise and fall of interest/disinterest in Bajan Theatre as well.

The dreadlocked actor believes building a database and a network is faster progress towards creating the framework necessary for initiating a true Association. The better you get at film, Nala observed, the less you feel the need to cooperate with associates and then the nasty threat of Glamour arises that can erase all ties.

Nala thinks all models of Film need to be examined before Barbadian identity is established – the audience agreed that January 26 to have a steering body reconvene on Fri. 1st Feb. 2008.

When they met at Bert’s – Christopher Cooke-Johnson of Creative Junction holds a similar view to Nala in that he is not sure if ppl really understand what they want, he saw 23-01-2008 more as a Production concern; he reiterated that if anyone desires a duty-free camera to import then apply now as there is an 8-month wait and until there are fast-tracking amendments to legislation then this is the reality all camera-folk must accept.

Chris sees Govt’s role as regulating change before everyone is inundated with a new landscape before they realise the old one is gone. You also have to look at what is a decent Return On Investment that everyone can live with…

Calvin Noel of Promotions Plus thinks the participants need to decide if they are a Group, Body, Association or Guild if they are to create a new identity. The Bajan Reporter wants whatever body is eventually formed to look at residuals on things like commercials or roles actors have done and set up a scale that all sides must adhere to…

Lisa Jackman from Greg Hoyos Associates cautioned about how those attending decided on what their name is as there is already an Audio/Video association within Govt, and this was a concern too for Stacy Bryan of the NCF who thinks the body should be a separate entity from Govt.

Nala reminded everyone they need to discern what is the policy of this Society as they look to practically develop the Trade which would lead to more willing desire to sponsor as there would be a tangible investment. He also thinks that any Learning Curve in forming this body should be used as an incentive for members to encourage each other to thrive. 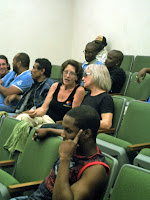 When the participants formed a steering committee, they again insisted that Yours Truly direct the interim team, a situation that does not rest easy with me as I mentioned before.

Nevertheless when the Committee reconvened Friday 1st February 2008, at Bert’s there was a small level of progress as the group discovered many concerns within an hour…

Chris wants to see a standardisation of rates, while ensuring that all available talent can continue to offer a needed diversity which makes for thriving multi-media. Alison Saunders-Franklyn holds the opinion that if there is a viability in this segment of potential employment then even more Bajans would seek this avenue as a career move allowing for a broader scope in the growing industry.

Alison also pondered on even if there was available monies, then where would folks train – as there is only Cuba in the Caribbean who really offers the kind of curriculum that Bajans are probably seeking. It was posed by visiting business consultant Lynette Eastmond that if qualifications are set forth then do not limit by certification as experience can eventually set the standard.

Chris asked how would accreditation be achieved and Alison suggested that the bylaws of a Trinidadian counterpart could pave the way for Barbados without having to reinvent the wheel.

Chris was glad for this tip and also offered a list of media personnel and asked the Committee members who is missing from it and to e-mail him the answers. The head of SFA Communications agreed this is an important step as training can be doled out according to how new or advanced a member can be.

Everyone agreed that subscription should be the same for all, there is an initial suggestion yet to be ratified that $100 is for six months and perhaps $150 for one year if paid up front.

Membership not only allows the group to try and invest so as to defray costs but it engenders a sense of commitment from someone who may look at the whole venture as a hobby.

The Steering Committee is considering the title of the Barbados Film & Video Association and will be conferring with the B’dos Coalition of Service Industries this weekend on the next step before hailing the balance of the tentative members.