Dancehall superstar Shaggy turned up the heat on The Tonight Show with Jay Leno (NBC) as the featured guest artist very recently. No stranger to prime time, Shaggy was originally slated on Jay Leno when his new album Intoxication dropped back in November, but the much anticipated appearance was postponed due to the writers’ strike in Hollywood. 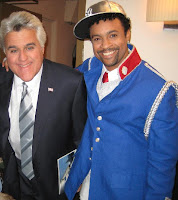 Performing his latest single “What’s Love,” a collaboration with hip-hop star Akon, Shaggy brought his signature moves to the set with gruff hardcore vocals and humorous facial expressions, sending the already screaming audience into a frenzy. “What’s Love” fits the formula of breezy dancehall-meets-hip-hop that has sent the Grammy Award-winning and 20-times platinum artist soaring to the top of charts for years.Intoxication (Big Yard/VP Records) has been a mainstay on Billboard ever since its release, peaking at #1 and coming in at #4 this week. With other remarkable collaborations, including “Mad, Mad World” with Sizzla and Collie Buddz, this new collection of hits is bound to intoxicate fans in the months to come.The official album tour will send Shaggy home to Negril, Jamaica on March 17 for a special Spring Break ’08 concert, then he’s off to Europe.