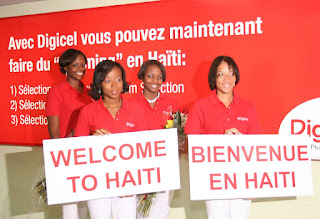 The third and last day of the Haiti Digicel Kick Start Clinic saw an aggressive and exciting game with strong defenses by both sides on Monday, January 14. The National U-20 team played against the Tempete senior team, Digicel Haiti Cup Champions, and proved that age is just a number defeating Tempete 2-1 at the Stade Sylvie Cator (National Stadium). 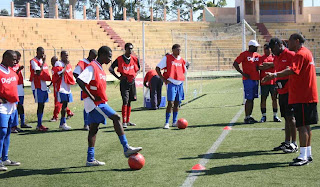 Head Coach of the Digicel Clinics, John Barnes, was not surprised by the score: “We witnessed a very, very good game of football here in Haiti. They beat a senior team which was a difficult challenge for the U-20, and they did it very well. Their tactical and overall technique was evident and they proved they are just as good as European and South American players.” 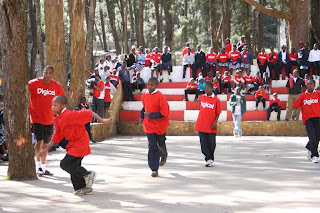 The Haiti National U-20 team put up a strong defense in a fast paced match. Though Tempete scored in the first seven minutes, the U-20 team refused to accept defeat and scored their first goal 18 minutes later and quickly claimed their victory 12 minutes into the second half. With 39 fouls and five yellow cards, the two teams played aggressively, giving the 1000+ spectators an exciting and memorable 90 minutes of football.

After an intense two-day training with Digicel Clinics’ head coach, John Barnes, and a win against their senior challengers, captain of the Haiti National U-20 team, Occenat Peterson, has high hopes to be a part of the selected six: “It has been a good three days. We have learnt a lot from M. Barnes. I think someone from my team will be chosen as we have worked very hard for this opportunity. I hope it is me.” He said smiling, “I would feel so great and proud and I will do it for my country. If it is not me I will still be happy, because they are my teammate and it will help my country. It will be a good thing for Haiti.”

President of the Haiti Football Federation, Yves Jean Bart, attended each day of the three-day Clinic and commented on what he thinks the Digicel Clinics mean for Football in Haiti: “Haiti soccer fans have admired John Barnes performance over the past 20+ years. Football is not only a sport in Haiti, it is a social activity. Everywhere you look on the streets of Haiti you will see young boys playing football. Digicel and the HFF have the same goal: To develop the FUTURE of Football in Haiti.

Digicel Clinics Head Coach, John Barnes, watching attentively by the sidelines, commented on the talent: “Haiti lives for football and you can see this through the reception the clinics have received from supporters over the last three days; I have seen a high level of football in Haiti.” 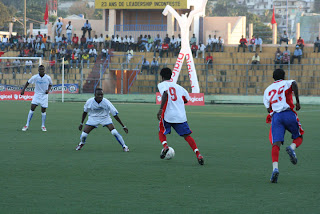 At the end of the CFU sponsored eight-country Digicel Kick Start Clinic tour Barnes will announce the select six chosen to train at Sunderland AFC’s Academy of Light for one week in March 2008. The Digicel Clinics now make their way to Barbados for the third leg ending Saturday January 19.