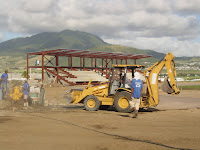 Regional administrators from the CARIFTA Games left St. Kitts and Nevis yesterday, confident that preparations for the athletic tournament are proceeding at a satisfactory rate.A six-member delegation, headed by President Neville ?Teddy? McCook of the North American, Central American and Caribbean Athletic Association (NACAC), spent the last three days touring the island and meeting with stakeholders as time draws near for the March 21 to 24 event.

On Tuesday, President McCook and others joined Minister of State responsible for Sports Honourable Richard Skerritt and Chairman of the Local Organizing Committee (LOC) Lester Hanley on a site visit of the Bird Rock athletic stadium. 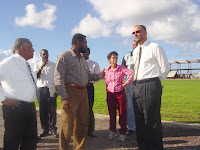 The Class 2 Track and Field facility is being prepared as the home of the 2008 CARIFTA Games.Project Manager Wycliffe Morton Jr. supported by Managing Director of Rock and Dirt Alexis Hazel, gave an update of the work progress. President McCook said his party was pleased with the development and the ongoing work.?I can assure you that ? we are extremely impressed with the progress being made by the LOC,? he stated. ?I can assure you that you can ?put your pot on fire? that we will have an excellent championships come Easter weekend.?The President?s comments were echoed by the CARIFTA Games regional sponsors Guardian Holdings Ltd. and National Gas Company Ltd. The companies? representatives noted that they are familiar with the excellent reputation St. Kitts and Nevis has in hosting top-class events and expressed pleasure with being associated with what is considered internationally as the premiere junior track and field tournament in the Caribbean.

The visiting delegation was assured of the continued commitment of Government to facilitate the staging of the 36th Annual CARIFTA Games. 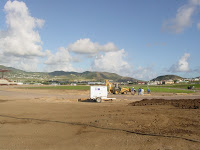 This was given by Prime Minister Honourable Dr. Denzil Douglas when he hosted the group at a luncheon yesterday at the St. Kitts Marriott Resort and reiterated by Minister Skerritt during the media briefing.

Minister Skerritt stressed that when completed, the US $5 million facility will be a specialist athletic facility designed to promote the development of local sprint prospects and provide the infrastructure to host other regional and international tournaments in the future.