When the Digicel Kick Start Football Clinics touched Barbadian shores, it met with resounding approval from the Barbados football fraternity. At a press briefing yesterday at the Police Sports Club Grounds at Weymouth in St. Michael, President of the Barbados Football Association and newly elected Member of Parliament, Ronald Jones, was not only grateful for the clinic but pledged additional athletic support for Barbadian sports in general. 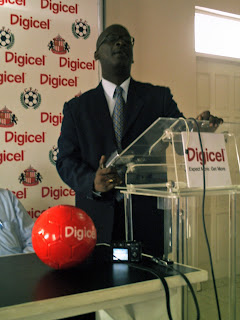 Mr. Jones, promised to continue refurbishment of the National Stadium at Waterford, but is of the view that Barbados in order to be more internationally capable for sports tourism must have not one but two more stadiums for games other than soccer. The Ch Ch East Central MP spoke of plans to develop one facility in eastern St Philip and the other at the former grounds of the North Stars Cricket Club.

The parliamentarian also wished that Bajan players could learn to be as hungry as their Guyanese or Haitian counterparts in wishing to seize this opportunity as afforded by Digicel. 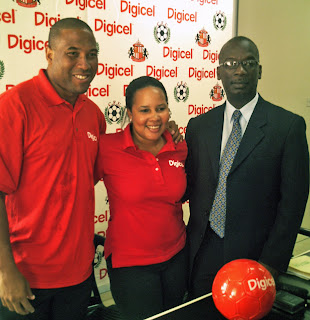 Meanwhile, an excited 38 players from the National U-19 team along with their 6 coaches and female manger showed up at the Police Sports Club eager and excited to participate in first day of the Barbados Digicel Clinics. Head Coach John Barnes kept the boys on their toes and made the training fun. 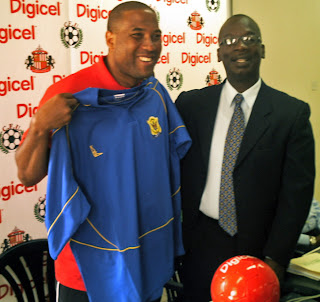 Barnes spoke to the boys about attitude, desire and discipline before working with them on technical and tactical skills. He worked on dribbling, ground and aerial passes, team building and decision making. 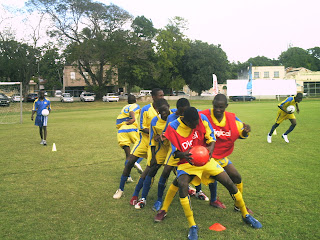 Team manager, Julie Grant commented on the first day of training: ?I?m very impressed. The Clinics are very well-organized and the boys have been motivated. The session was lively and fun. The intensity is more than they are used to, but John makes it fun. The two days of training will definitely motivate these boys and uplift the entire team. I hope this will be an annual event.? 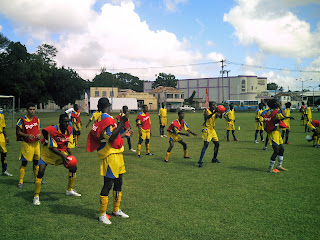 The eight-country Digicel Clinics brings John Barnes to Barbados in search of six young, outstanding footballers to have an opportunity to train for one week at Sunderland AFC‘s Academy of Light in England.

Digicel, the largest sponsor of football in the Caribbean, conceptualized the Digicel Clinics to offer talented young Caribbean footballers a once in a lifetime chance to learn invaluable footballing skills from one of the territory?s greatest ever footballers, while at the same time being given the opportunity to realize their dream of becoming professional footballers.

The Barbados Digicel Kick Start Football Clinics began yesterday at the Police Sports Club and will end on Saturday January 19 with a friendly match between the National Under-19 team and the Carlton Pro Shottas.