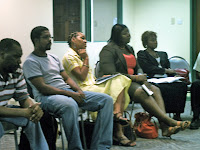 At The Manor Lodge’s Dining Club on Green Hill, a budding hurricane for change in aspects of the Barbadian entertainment scene unexpectedly came via an NCF seminar on the future of Film & TV in Barbados…

Many participants made numerous calls in removing CBC TV from its near half century of dominance in a video monopoly; the desire for a Film Commission to provide incentives for local, regional and overseas film-makers to create works right here; as well as the need to devise a Film Guild to develop a resource service for those who wish to make this as a career decision apart from actively lobbying as an NGO to liaise with previously untapped entities to invest in Barbadian cinema. 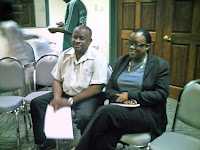 Peter Edey, the popular chef whose DVD series are on many the shelf of folk who are tired of burning water and wish to know what Cordon Bleu means, regaled the nightmare he endures to ensure his programme is seen – taking loans in the hundreds of thousands to provide payment to ensure the airing of his programme!

Now, it is under threat from the Digicel Rising Stars who want to use that area for their series, despite his having held that time-slot for ages beforehand. Now he is desperate to learn about sponsorship in an effort to offset costs that are swamping him.

He was one of many participants who longed for competition that would get CBC to stir its stumps and stop abusing its position of a one-eyed man in a blind kingdom.

Ms Oriel Nicholls of the Bureau for Gender Affairs made a suggestion that people attending the seminar assist in formulating an NGO for aggressive lobbying with regards to educating groups like the Kennedy Centre or the Kellogg Foundation about using Barbados as an investment base when it comes to cinematography.

There were calls by many for a concession of wither duties or taxes on accessing equipment such as editing or camcorders – yet both videographer Rivelino Simmons and ex-Senator Lynette Eastmond stated that those can be granted immediately but you have to be patient.

Portia Blackman, CBC’s best ever weather presenter and currently with the Barbados Lottery on evenings but Fitness Instructor during the day, 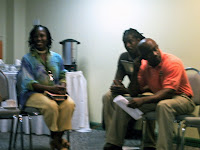 wants to see Training courses developed in areas like Marketing and Editing. She does not think the Caribbean in and of itself is marketed enough overseas and a music video or a programme has a longer effect than a 30 second spot.

Portia also believes that tv throughout the region should have more music videos and Health & Fitness programmes.

A rep from Invest Barbados, Tonika, was glad for the conference since her organisation wants to unleash the potential of the Services Sector, and the Film Industry is one area which needs shaping to this regard. 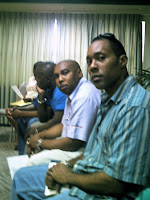 Sean Russell, the creator of The Kite Flyer, wants assistance in Distribution and Promotion, and welcomes any help from Invest Barbados, as he finds it an uphill battle to get his DVD out there be it Barbados or anywhere else.

Ayesha Gibson, is an aspiring actress/writer – she made her mark as a Production Assistant with Hit For Six and was grateful as it placed her name at the IMDb.

Ms Gibson sees too many Bajan stories go untold, and one of the main dynamics that is never openly addressed is the paradox of this country being Colonial yet Independent – something that was only briefly touched on in From Barbados With Love.

Annalee Davis, maker of “On The Map,” (This is a documentary which follows the fragmentisation of the Caribbean for various reasons, she has a very intriguing blog, give it a regular scope!) 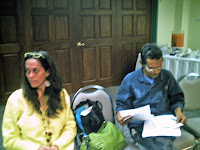 would like for a pooling of resources and rather than ppl expensing themselves in BUYING equipment create a resource where videographers can RENT their paraphernalia.

Rivelino Simmons is still amazed how CBC & CMC expect programming for free, yet they know if they go regionally or internationally they have to dig in their pockets. He wants to see some sort of Guild deal with sponsorship – whether selling locally, pan-Caribbean or abroad – then if CBC or CMC are charged then he can offer a low rate if his feature has a WIDE distribution.

Penelope Hynam, I learned had decades of experience with Canadian TV, on that basis she was calling for another TV station so CBC would jump up and be forced to give those in the industry the respect that was way overdue apart from ensuring some form of compensation; she also sees the need to encourage investors a massive tax-write off to encourage sponsorship of local films as well as the need for a Film Commission (Just like how Miguel Drayton made a call of the same matter at last year’s Bridgetown Film Festival)!

Jackie Curbishley, is a UK expat who wants to invest just to be receiving a proper ROI, she believes there is more culture to be found in Barbados if the Film & TV Industry are given the right channels to not just grow but to thrive.

She speaks with years of experience under her belt, 25 in the music industry/ writing promotional blurbs for LP’s/ selling a so-far unused script to Miramax Films. 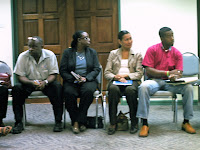 The two main contributors were Lynette Eastmond (she calls herself that professionally, but privately she is Mrs Martin Parris) and Alison Saunders-Franklyn.

The former Senator wants ALL Barbadians to get out of the culture that if one Bajan making money, then they don’t wanna work with “he,” as he will make a profit off “my” sweat… Make a drastic conscious effort to alter that viewpoint and instead say – “I will profit TOO” and in this sense Bajans would then become true revolutionaries! 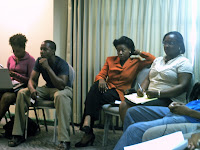 – use it to learn there are avenues open for Bajans to do documentary films via the United Nations or that if a Film Guild is created then register it thru the Barbados Coalition of Service Industries, a private sector created but Govt-funded project.

Alison thinks immediate goals can be accomplished by creating workshops for scriptwriting, these are what she refers to as “low-hanging fruit,” but there must be a serious revamp of Barbadian laws so as to pave the way for incentives of investment and not only Bajans to make a movie here – but for overseas productions to choose Barbados as the place to make a film!

There are plans to request a meeting with new Culture Minister Steve Blackett (a former CBC News Anchor) to look at ways to carry forward Barbadian Film & TV Programming, apart from a follow up gathering this weekend looking at the possibility of starting a Film Guild or similar NGO, The Bajan Reporter will keep you posted!