For the second consecutive year another Barbadian Artiste has made it to the Finals of the International Groovy Soca Monarch Finals.

2007 People’s Monarch and Road March King Mr. Dale has gone through to the final stage of this year’s competition with his hit song ?Soca Junkie?. In a tightly contested battle held at the Arima Velodrome in Trinidad.

Mr. Dale secured a spot in the top three during the semifinal stage among the likes of Trinidad’s Kerwin Du Bois featuring Shal Marshall, and Patrice Roberts to book a spot in the Finals where he will compete against fellow Barbadian and reigning International Groovy Soca Monarch, Biggie Irie who will be defending his current title with his 2K7 release ?Band on Fyah.?

Barbadian Party Monarch Finalist, Peter Ram also competed in this highly respected competition, with his pulsating track ?Pumpin? This infectious song which is on the Nirvana Rhythm, is being heavily rotated on the Trinidadian airwaves and is always penetrating the international market.

The ten finalists for the International Groovy Soca Monarch Competition are – 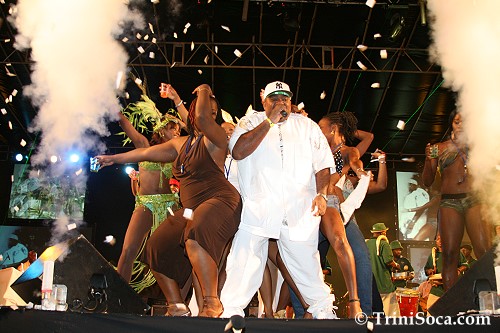 The finals come off on Fantastic Friday, 1st February, 2008 at the Queens Park Oval, Port of Spain.