There are many stars from the Caribbean but there is only one Jadine. Born Jadine Greenaway and hailing from the Emerald Isle of Montserrat, Jadine aka the Soca Deva first discovered her calling for soca music as a child, and has turned that passion into a successful career since 2004. “My mother has a beautiful voice and I used to sing with her, sometimes while driving in the car or cleaning the house on Sundays.” 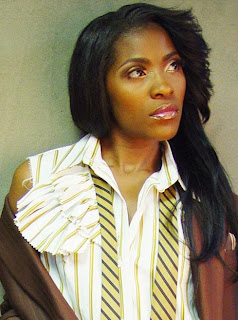 In fact, it was her family who first discovered her star power, forcing her to sing at a relative’s wedding. Not surprising, today that potential is realized as the demand for a performance from the Soca Deva has spread throughout the Caribbean entertainment industry.

Poised, passionate and driven, Jadine’s take on the soca is exceptional, as she blends the bluesy sounds of R&B into the genre, giving it that modern touch that is inherent of the songstress.

“I have a natural appreciation for all kinds of music,” reveals Jadine. “Though soca is my first love, rhythm moves me naturally so I find it hard to stick to one particular sound.”

It’s that fusion that is gaining her fans worldwide, as they are drawn to her tunes, which are heavily influenced by pop, reggae and even house.

Currently the Soca Deva is preparing to deliver her sophomore studio effort, Unleash The Deva, due out in late 2008. It’s a promising collection of sexy soca beats fused with catchy lyrics, as demonstrated in the first single, “Don’t Call My Phone” – a bona fide hit for all carnivals this year. Now the release of a sizzling new video for the new single will only cement her name as a celebrated soca queen.

Shot on location in New York City, the video sees guest appearances from Hollywood actor Lamman Rucker (Why Did I Get Married?), Kulcha Don and soca star Ragga, just to name a few.