Coming off a successful stint of shows in Senegal alongside Senegalese pop and reggae acts:

Peter ‘Jahpetes‘ Morgan, Morgan Heritage vocalist observed, “What we have worked on for the past three albums is to mainly bring the stage to the record, a lot of people come to our shows and they’re like, ‘Wow, you sound so much better than your record, it’s unbelievable.’ And we’re like, ‘Wow, what is this difference that they’re noticing that’s not on the record?‘ They say they love the records, but when they come to the concerts, they fall in love with the group all over again“

Produced by Morgan Heritage, aided by Shane Brown and longtime friend and supporter Bobby Digital, ‘Mission In Progress’ is more than any of the band’s previous discs; it is the realization of its “ROCKAZ” concept: reggae music with an edge.

The first single from ‘Mission in Progress‘, is the first song to represent both the old neighbourhood and their home for the past 11 years: Jamaica. ‘Mission in Progress‘ veers at times from hard-hitting and gritty on tracks like 12 Shots to the straight-up romantic on songs like Love You Right.

A lot of the influences on the album are derived from Morgan Heritage’s experiences on the Warped Tour which has been one of Americans most successful tours over the past ten years and features a cacophony of rock, pop, punk and reggae artistes on one stage. 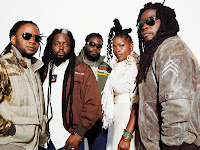 There are also influences from foundation reggae group Steel Pulse who they cover with Raid Rootz Dance.

Morgan Heritage is focused on the direction they want there music to go and are continuing to work on their mission to influence the people in a positive way.

Born in Brooklyn’s tough Bushwick neighborhood, the band’s five members were raised in Springfield, Massachusetts and debuted in Jamaica at the Reggae Sunsplash Festival of 1992.