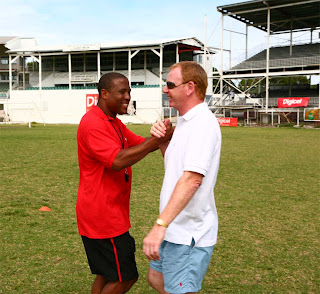 A regular visitor of Antigua, Fairclough heard that John Barnes was in town coaching the Digicel Clinics. Fairclough explains his visit to the Clinics: ?I had to come and see what these Clinics were all about. This is a great idea. The Caribbean is an untapped market. The making of a professional footballer doesn?t happen overnight but this is a helpful start. Digicel and John Barnes are definitely helping football in the Caribbean.? 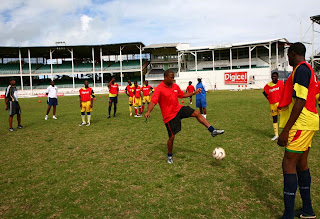 The three-day Antigua Digicel Clinics began on Sunday at the Antigua Recreational Grounds in St. John?s with 22 boys from the National U-20 team, most of whom are from the Premier Division clubs, in attendance. The National U-20 team was chosen last week by the Antigua & Barbuda Football Association (ABFA) and consists of five players from Hadeed Motors Villa Lions, four from Stanford Group of Companies Bassa, three each from Champion Footwear Hoppers and from Potters Tigers, two from Samantha SAP and one each from Timeless Treasures Freeman’s Village, Asot Arcade Parham, Old Road and Young Warriors. 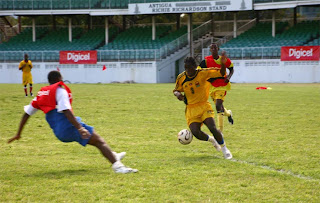 Four local coaches were also selected by the ABFA to be a part of the exercise: Rolston Debu? Williams, Lenny Hewlette, Vaughan Joey Christopher and Darryl Michael. Rolston Williams, Parham FC Head Coach expresses how he feels about the Digicel Clinics:

?It has been very educational so far. The principles of football remain the same but Mr. Barnes has simplified things for the boys, making it easier to understand and apply. He spoke a lot about organisation. Antigua has a chance of getting at least one boy to Sunderland, we have good talent here, it just needs to be harnessed properly, hopefully these Clinics will do that.?

The Antigua Digicel Kick Start Football Clinics with Head Coach John Barnes will end on Tuesday January 29 with a friendly match between the National U-20 and the winners of the Digicel text competition, All Saints Secondary, at the Antigua Recreational Grounds in St. John?s.