“How you train is how you will play. Practice skills while training and it will enhance your performance. The little things are important. Correct practice is what makes you a good footballer. Practice makes permanent.” 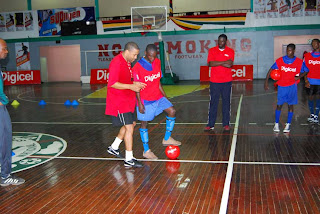 That was part of Caribbean-born International footballer John Barnes‘ opening remarks during the first day of the Digicel Kick Start Clinics in Guyana was the definitive message to the 24 players of the Guyana National U-20 team and their five coaches.

The first day of the Guyana Digicel Clinic was held indoors at the Cliff Anderson Sports Hall in Georgetown due to heavy rains which started the night before. The Guyana National U-20 team, a bit closer to the opportunity to train in England, along with their coaches, stood attentive and eager to learn from the Digicel Clinics’ Head Coach. Barnes instructed the Guyana team on the importance of technique, discipline attitude and practice. 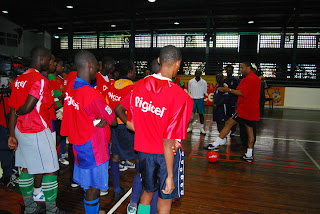 Not hindered by the smaller venue, the players and coaches set out to show Barnes their skills and training techniques. By conducting drills, Barnes had the opportunity to identify the team’s strengths and weaknesses and help the National coaches improve on their coaching skills.

The five coaches of the Guyana U-20 National: Lyndon France, Joseph Wilson, Gavin Browne, Sampson Gilbert and Bilaal Nantambu all received training from Barnes, Head Coach of the Digicel Clinics, which they found useful for the development of players in Guyana. 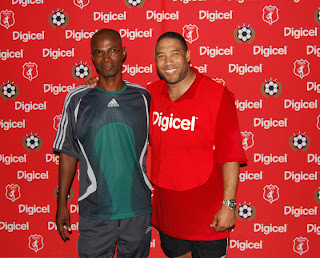 Coach Lyndon France commented on the value and benefit of the Digicel Clinics: “I feel the experience from the Digicel Clinics will help develop football in Guyana. The benefits of such training are not always able to be seen instantly but the seed has been sown and that in itself is a benefit for Guyana football... I’m excited to come back tomorrow to learn more.”

When asked if he thought a Guyana player had a chance to be a part of the chosen six to train in England at Sunderland AFC’s Academy of Light, France smiled: “Guyana has a definite chance to be chosen. I myself have seen the skill of three of my players here today and I know John sees them too.“

France feels that Guyana’s major competition for the chosen six is Haiti, Jamaica and Trinidad.

Barnes’ ability to give back to the Caribbean community is uniquely beneficial as he has had the experience to take his natural Caribbean football skills and hone them in England – “I saw the raw talent I expected to see, what I’m looking for now is the right attitude. I hope that we will be able to go outdoors for the match on Wednesday so that I can really get to see these players on a proper pitch.” 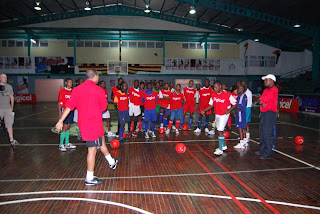 The Guyana Digicel Clinic ends on Wednesday January 9th when the Guyana National U-20 team plays the Fruta Conquerors, voted by the public to participate, in a friendly match.

Barnes will be looking at all players (National and Conquerors) today to determine if a Guyanese footballer will be a part of the lucky six chosen from the Caribbean to train at Sunderland AFC’s Academy of Light this year.

Digicel is the lead sponsor of Caribbean sports teams including the West Indies Cricket Team, Special Olympics teams across the Caribbean and is title sponsor of the Digicel Caribbean Football Union Cup, which involves over 30 Caribbean countries and is an important qualifier towards the CONCACAF Gold Cup.