Shaggy’s Intoxication blasted onto the Billboard Reggae Chart at #1 when it hit shelves in November, and now it’s heating up as he teams up with hip-hop mastermind Akon on his next single. 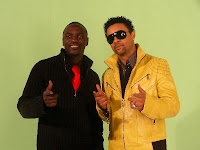 Shaggy unleashes all the elements his fans expect on “What’s Love” – a proven and familiar formula that sees his macho hardcore chatting, fused with Akon‘s flowing R&B hooks, riding a catchy hip-hop beat.

Shaggy hauled in the genius of Hype Williams to bring this track to life, and it will hit airwaves within the next few weeks. It will then have to battle the “Bonafide Girl” video, his second single from Intoxication featuring Rik Rok, which has been getting non-stop play ever since its release.

So what’s next for the platinum pop star? Shaggy is taking Intoxication, and well most of the Big Yard crew, for shows and promotion across Europe in the upcoming months. But if you are in the Caribbean or plan on heading there soon, a good time would be March 17 when Shaggy hits the beaches in Negril, Jamaica for Spring Break.