The National HIV/AIDS Commission was recently highly commended for the sterling work it has been undertaking in the response to HIV by a visiting US Professor, Carlton Gill.

Professor Gill, who was vacationing in Barbados, handed over some literature, condoms and other items to the Commission, to assist with its ongoing campaign to bring greater awareness to HIV/AIDS. 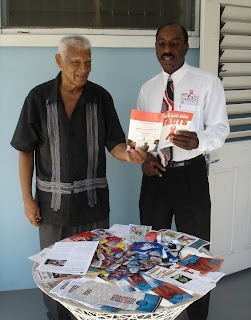 Miss Armstrong thanked Professor Gill for his kind gesture and said ?the Commission is fully supportive of individuals who make it their business to get actively involved with the dissemination of information on HIV, because it heightens people?s awareness of the illness.?

She assured Professor Gill the donated items would be used in the various educational programmes spearheaded by the Commission.

Professor Gill opined that everyone had a part to play in terms of creating a greater sense of awareness of HIV and ignoring this could be detrimental.

?Until people change their sexual behaviour, this virus will remain with us and likely continue to grow. What is so pitiable in all this is the fact, that this virus can be avoided,? Professor Gill added.