When the Stanford 20/20 Cricket Tournament gets underway this Saturday, 26 January at the Stanford Cricket Ground, those gates will open at 4:00pm and fans can expect an exciting, 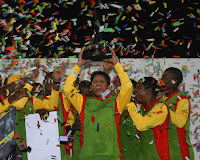 The Cayman Islands will take on the St. Lucia Stanford 20/20 Professional Team at 7:15pm but the entertainment begins even earlier when the gates open and the big replay TV screens fire up and Antigua?s legendary Chickie turns on his sound system.

At 6:00pm the opening ceremony begins with the singing of the Antigua & Barbuda National Anthem by Claudette ?CP? Peters, and a prayer. Then the King of the Dancehall, Beenie Man, will take to the stage to perform the Stanford 20/20 Anthem, Let the Battle Begin, accompanied by CP and a local dance group, Innovations. Sir Allen Stanford, creator and financier of the Stanford 20/20, will give welcoming remarks followed by an introduction of the captains of the 20 teams who will be participating in the Tournament.

Antigua & Barbuda?s own national hero and Stanford 20/20 Board Member, Sir Vivian Richards, will declare the Tournament officially open and that declaration will signal the onset of a fantastic pyrotechnics show and the showing of the 2008 Stanford 20/20 theme song and video, Come Rise With Me, as performed by Machel Montano and Claudette Peters. The match will commence shortly thereafter.

Entertainment will abound at all of the Stanford 20/20 matches, says organizers, and fans can expect to see a variety of artists perform during the five weeks of the Tournament.

?Apart from the local entertainers such as Claudette Peters, the Iron Band, Chickie and the Mahico Stars Steel Band, Beenie Man, Machel Montano, Allison Hinds, Patrice Roberts, Rupee, Shurwayne Winchester and Kevin Little will all be joining us at different times throughout the Tournament to perform for the Stanford 20/20 fans,? says Rhonda Kelly, Stanford 20/20 Event Director. ?I would encourage all Antiguans to support the matches because you never know which artist will be making an appearance.?

To enhance the Stanford 20/20 experience, several improvements have been made to the Stanford Cricket Ground, says Kelly. These include more restroom facilities and the addition of a concession stand on the Northern end of the ground.

The Stanford 20/20 begins on 26 January and the final match takes place on Sunday, 24 February. The ticket office is located at the Stanford Cricket Ground in the parking lot of the V.C. Bird International Airport.