The efforts of the Denzil Douglas regime have guided St. Kitts and Nevis to become a major player in the world of sports, but the Federal islanders must put deeds behind words to make this potential a reality.

This was stressed not that long ago by President Neville ?Teddy? McCook of the North American, Central American and Caribbean Athletic Association (NACAC) during a briefing at the Warner Park cricket stadium. 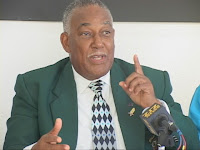 ?You are in an environment where you have facilities that can accommodate four major sports,? said McCook, adding that the completion of the Bird Rock athletic stadium will expand that number to five. ?What you need is the leadership of these individual [sport associations] to start looking to see how they can utilize these facilities.?

The NACAC President highlighted the geographical location of the twin-island state and the excellent accommodations and suggested that focus be placed on attracting regional and international sporting tournaments for juniors and seniors as well as to invite foreign teams to use the facilities during the winter season in their respective countries.

The Ministry of Tourism, Sports and Culture has had success in the latter. A record total of 1,797 athletes and officials from 31 groups visited the Federation last year.

The hosting of the CARIFTA Games and the visit of several county cricket teams from England and India, and a soccer team from Canada in March coupled with two One-Day Internationals between the Australian and West Indies international cricket teams in July points to a productive 2008 sports tourism season.

Mr. McCook explained that the frequent use of sporting facilities for local, regional and international events will significantly benefit the country and the economic spin-offs will impact various sectors in the economy.

?You will not only have attendance from the residents of this country but people will follow the teams from the other territories,? he explained. ?So ? you are providing employment for people in the tourism industry and the sporting arenas because you need maintenance people and most of all you are developing your [youth and sporting] programmes.

?There are a lot of things that can be done, but you need enlightened leadership in the use of these sporting facilities because if you don?t they will rot away,? McCook concluded.