The final day of the St. Kitts Digicel Clinics ended with an exciting and crowd engaging match between the National U-20 team and the older and more experienced Digicel Village Superstars. With the Nationals winning 2-0, they proved to Head Coach, John Barnes that they indeed take their football seriously. 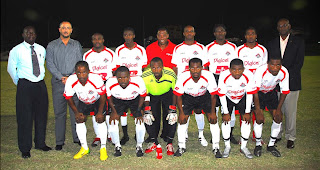 It may have taken the Nationals 15 minutes to get into the groove but when they finally took possession of the ball they put out all the stops to prove that they were fit for the select six. With a match packed with action, there was controversy in the second half when the first goal scored by the Nationals was disallowed due to a hole in the net. Kevin Benjamin who scored the goal explains: “It was definitely a goal, the ball came out of the net through the hole and the referee said it was wide. I was disappointed but I remembered what Mr. Barnes said about reacting to disappointment and it drove me to score the next goal.“ 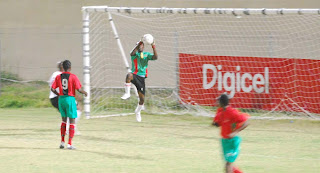 Head Coach, John Barnes, obviously impressed by the result of the match, commented on how he felt the Kittitian Nationals played: “The Nationals played a good game and they showed discipline and that they could handle pressure. The Village Superstars were older and put up a strong defence but the Nationals proved that with the right attitude you and teamwork you will succeed.”

Byun Morson, scorer of the second official goal, gave his opinion of the match and the Digicel Clinics: “It was a very competitive game, all of us in the team had a role to play and I feel we displayed our roles properly and played as a team. I love the fact that Mr. Barnes was rooting for us the entire game. The Clinics were very informative and definitely benefited us which I feel showed in the game.”

When asked if a Kittitian footballer had a chance at making the select six who go to Sunderland, Morson answered: “A very good chance. I have a good feeling that at least one of us is definitely going. It would be a great opportunity to get the exposure.” 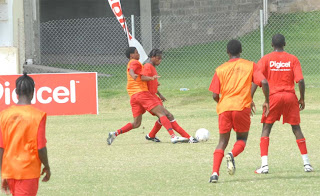 Niall Quinn, Sunderland AFC Chairman, explains how the Academy of Light will benefit the six Caribbean players selected by John Barnes: “The Academy of Light is one of the finest training facilities in the UK and it provides the best possible environment for any young football player to develop. We have state of the art equipment coupled with first-class coaching, fitness and medical staff. We believe that the atmosphere we have created will give these six youngsters the best possible chance of realising their dream to become a professional footballer.”