will have its base load electrical power supplied by geothermal energy towards the end of this year. 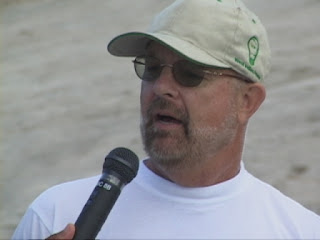 Chief Executive Officer (CEO) of West Indies Power Nevis Ltd, Mr. Kerry McDonald made the disclosure during an exclusive interview with the Department of Information recently, as the company commenced drilling operations at its first site in the Spring Hill area.
?This rotary drill which is going to drill an 8-inch hole down to 500 ft that?s what we call the connector it will then move off the rotary core rig to what is called a slim hole down to 7,000 ft. From that slim hole we will be able to test the resource, know the quantity and quality of the resource. That will take approximately 30 days after that the production rig will come on and it will drill a 7000 foot hole that?s 20 inches in diameter from which we will start production of geothermal energy here on the .
?That will take approximately 60 days after the first hole is completed. By the last quarter of this year will have all of its base load power from geothermal energy,? he said. 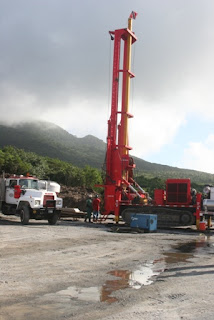 Mr. McDonald explained that a portable geothermal power plant had been ordered and once received would be hooked up at the Spring Hill site when the second production well is completed between July and August. He said the next step then will be to drill out of the 1 site
Currently, consumes only 10 megawatts of energy and the Spring Hill site is expected to generate between 100 – 200 megawatts of geothermal energy.
?We will start with five production holes. Each well will be able to produce 10 megawatts of power that will be 50 megawatts. We will take this site the 1 power plant which we hope to have on stream at the end of 2009. So at that point that will supply 100 percent of the electricity for and we will have additional power for export for St. Kitts and other islands.? 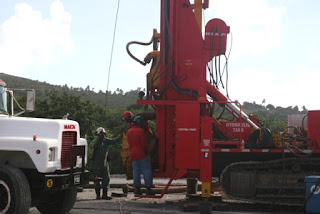 The CEO also disclosed that Junior Minister with responsibility for Public Utilities and Communications the Hon. Carlisle Powell along with General Manager for West Indies Power Nevis Limited, Mr. Rawlinson Isaac attended a January 21-22 Caribbean Energy Conference in Florida, where they were expected to announce the commencement of drilling for geothermal energy on Nevis and present information on the project.
He said the forum was also expected to create an avenue to market the product which was attended by Ministers of Energy and other representatives from Latin America and the .
In February 2007, The Nevis Island Administration had issued an 18 month license to the company to explore the geothermal resource of the island.
West Indies Power Nevis Limited had conducted exploratory work at a number of prospective drill sites and identified two other drill sites, and Bush Hill that would be developed.