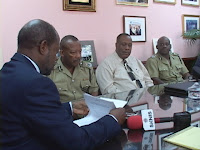 Austin Williams has been officially tapped to be the Commissioner of the Royal St. Christopher and Nevis Police Force.

The announcement was made by Prime Minister Honourable Dr. Denzil Douglas at Government Headquarters on Wednesday. Flanked by top officials from the Police High Command and the Ministry of National Security including Minister the Honourable Dwyer Astaphan as well as by Attorney General Honourable Dennis Merchant, Prime Minister Douglas congratulated Mr. Williams. 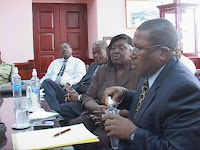 ?I want to commend you sir and congratulate you for the service that you have [given] and the leadership that you have provided to your men over the last few months,? he said.

Mr. Williams has held the post of Acting Commissioner of Police from October 2007.

Stafford Liburd was tapped to be the next Deputy Commissioner of Police while Joseph Richardson and Joseph Liburd were also identified to hold the posts of Assistant Commissioners of Police. Prime Minister Douglas noted that the top ranks of the Police Force is filled with extremely competent men and stressed that the appointments were strategically done.

?We are positioning the Force for the future,? he explained, noting the exemplary service and dynamic leadership shown by the men. Prime Minister Douglas added that crime fighting and prevention is a fluid field that requires a strong but flexible plan of action to deal with the constantly evolving environment. 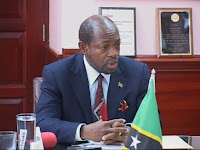 The St. Kitts and Nevis leader expressed confidence that the Police High Command would continue to rise to the challenge and assured the body of the continued support of his Government.

Prime Minister Douglas thanked the current Commissioner of Police Robert Jeffers and Deputy Commissioner of Police Meredith Charles for their years of dedicated service to the Police Force and the people of St. Kitts and Nevis. Both men are on leave and will retire at the end of February. This means that the appointments announced by the Prime Minister will take effect when Messrs Jeffers and Charles retire next month.