Barbados? Autism Association got a great boost in creating a Centre for their wards via the kindness of the Anglican Church.

Their President Lawton Walcott unveiled plans for the Centre shortly after he received a cheque for $10 000, part of the proceeds from the Anglican Church?s classical concert, featuring Trinidad-born Soprano Jeanine DeBique at the Frank Collymore Hall on October 18 and 21 last year. 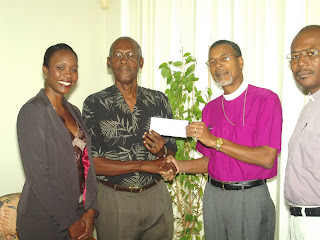 ?In this centre we will be looking after autistic children, even on weekends. It is a 24-hour job that will take tremendous effort and resources,? he added.

Walcott revealed although the association had not yet entered the final planning stage for the proposed centre, it was considering starting a facility, as a pilot project, on about two acres of land, initially catering to about 25 persons.

Besides raising funds for children with autism, proceeds from the classical concerts were also intended for the development and training of young organists in the Anglican Diocese. 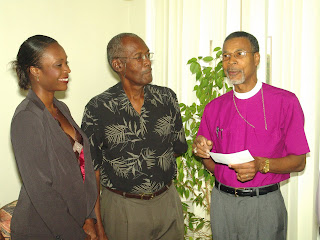 Miss Debique, now pursuing her Master?s Degree at the Manhattan School of Music in New York, was in Barbados for the presentation function at Diocesan House on January 14.

The Autism Association has, for some time, been studying the needs and problems of persons living with this condition. It has also conducted fund-raising drives, including concerts by the Royal Barbados Police Band, to finance the setting-up of the proposed centre.

Originally, they thought of operating a care-giving facility out of a ?container?, as a short-term measure, as its president explained, ?starting on a smaller scale then moving forward.?

However, Walcott reported the association received promises of land from the previous regime here, as well as offers from international organisations for the training of persons to deal with autistic children.

?We certainly will do the model this year. We want to get it started and see what the real problems are,? added Walcott.

Meanwhile, Miss DeBique thanked the Anglican Church for inviting her to perform at the fund-raising concerts for children with autism.

She said she was delighted to be able to contribute to an awareness of what could be done, in terms of the development and care of the autistic child. She also urged adults to encourage and be patient with such children.