Bling *OR* Ting: Question for Jamaican Performers as their fame grows

Caribbean music has always been depicted in certain ways – artists are almost always vying for love, lust, power or revenge, common themes in urban music emanating from the American hip-hop and rap game. 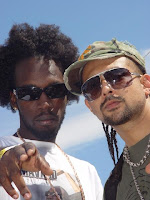 However, one thing you almost never hear, are Caribbean artists driving lyrics that boast of their personal wealth and financial status.

As much advancements made in time and technology, many Caribbean countries remain third-world economies, and the musical stars emerging from these lands rich in culture and heritage are its modern-day royalty. However, the majority of stars (some superstars), have remained relatively humble in song and speech, of their new-money status. In the States where new money can provide lyrics for an entire song, that has not been the case in the Caribbean, until now.

But does adopting the bling lyrics alienate or acquire fans? The argument anything that sounds good will be sell is no longer valid, especially when some Caribbean nations are credited with producing more music per capita than many other countries in the entire world. With the infinite pool of talent, fans can truly make or break careers, and staying focused on the expectations of one’s fan base can be key to an artist’s success, and inevitably lead to ultimate bling bling.

Even after decades, revered reggae artist Beres Hammond‘s recent single “Try If You Want” opens with, “I might be poor but I’ve got my ambition,” while Shaggy and Sean Paul are still rapping about getting girls, and soca star Machel Montano never forgets about wining. Even dancehall newcomer Mavado, who charges upwards of $20,000 U.S. per club performance overseas, never addresses it in his music. In fact, he’s often viewed in his videos singing about being on the “gully side” or the ghetto, while sporting $400 sunglasses from couture Italian designing house, Bvlgari.

These are a few of the Caribbean artists who currently perform for sold-out crowds internationally and pack away big bucks, but never mix their bling into their ting.

However, some artists today are making the mistake of forgetting their audience, many with a core fan base hailing from the garrisons – poverty-stricken, crime-ridden districts. In many Caribbean countries, music is oftentimes the one shining hope of escape for the aspiring and ambitious in these areas.

The urban formula for the American rapper does not necessarily work for the Caribbean artist. Already troubled by extensive bootlegging and low record sales, Caribbean entertainers must be careful they don’t lose the only fans and support they have.