Bear-ly saved from digestion and a cat may look at a mountain: ANIMAL CRACKERS

Over in Germany, a contest led thousands of entries from all over the world flocking to a zoo to name a baby cub narrowly snatched from endangered extinction by its own family –

Zookeepers announced last week that they had taken Flocke away from her mother after fears the mother would eat her.

The zoo’s other female polar bear had recently eaten her two offspring, and the zoo was concerned that Flocke’s mother would do the same. 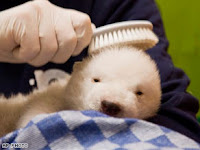 Zookeepers have been bottle-feeding the five-week old cub and keeping her warm with blankets and heat lamps.

The zoo has released pictures showing zookeepers cleaning and feeding the fuzzy little bear, whose eyes are barely open.

The name for the little baby girl is quite natural, when considering her appearance; like a little snowflake (not that she would stay that size, LOL) –

The bear, which lives at Nuremberg City Zoo, will be known as “Flocke,” which is German for “flake.”

Officials at the German zoo said they received more than 50,000 e-mails, letters and postcards from all over the world suggesting names for the female cub.

A jury with representatives from the zoo and town council decided on the name Friday.

Meanwhile across the pond, a feline climbing in years will be calling it a day from mountain patrol, according to CNN –

The regal ex-stray with a bright white coat and black splotches was carried off the mountain Wednesday for the last time and will live with some park rangers in the valley below due to old age and a recent infection claiming the last of his teeth.

“He’s 17 or 18 years old, so he’s getting up there. We wanted to do the most humane thing for him,” said Scot Henley, executive director of the nonprofit weather observatory. 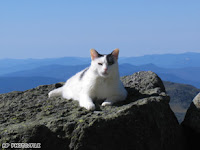 Nin is moving in with Diane Holmes and Mike Pelchat, rangers at Mount Washington State Park, after years of petting and pampering from visitors and researchers alike.

He seemed to be immune to winter, rain or summer; perhaps another reason he was not only popular but loved and respected –

Nin was never fazed by the gusty wind and bad weather. He trotted down the peak with the rest of the crew during a fire in February 2003, going straight back to work when the time came. He was a welcome pal to legions of meteorologists and scientists passing through during weekly stints taking weather measurements in hurricane-force wind and heavy fog.

It may not be the same, but like how the Phantom, or Batman and Zorro continue for generations… There are plans to find a similar but younger version of Nin –

The observatory isn’t expected to be feline-free for long. The Conway Area Humane Society is evaluating successors to take over by the end of January, Henley said. They’re looking for a new cat who is friendly, not spooked by bad weather and has the wits to know when to come in out of a storm.

Has anybody asked how NIN feels in the midst of all of this?

I was named after the French feminist writer, Anais Nin, until the Observers looked at my underside and found out I am a boy. Now I’m just Nin. I used to wander as a stray in Vermont, looking for half-empty Ben and Jerry’s pints, until I happened upon the home of Mark and Susan Ross-Parent. Since I am a one-cat household kind of guy, it was decided to find a new home for me — at the summit of Mount Washington. Now, I am the latest in a long and famous line of Observatory felines (hey — when do I get my own poster?).

I like it on the summit — I get pampered and coddled, and have to do very little in return, curl up on the occasional lap and so on. I have been up here for several years now, and find it very unnerving to head down the mountain (especially since they only take me to the Vet’s!). Well, I guess it is time to catch some mice– NAH! I’ll just take a nap instead.