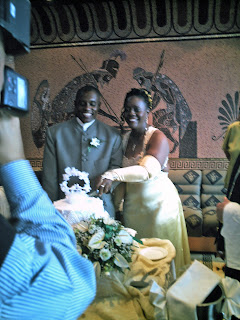 Everyone after a certain amount of rain in their lives deserve a rainbow and Yvette Griffith (nee Harris) certainly qualified – she and I have been strictly platonic friends from 1992, so I know the crap she went through in various stages of her life with alleged humans deemed males by most societies… Let’s just say they’re over with, and those episodes should be emotionally landfilled away never to be seen again. 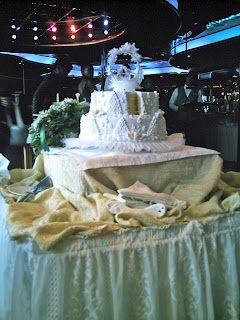 She is a gifted lady – she plays the piano, can do a very lively shift on radio as a deejay and has been a part of the Water Authority‘s Public Relations arm since 1994. 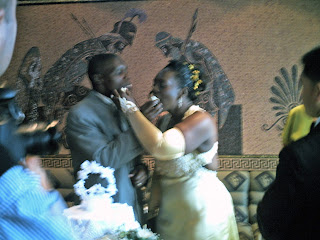 I do not know much about Stephen Griffith (Mr & Mrs Griffith are co-workers but different departments), I met him about 3 years ago, he happens to have the first name as one of Yvette’s previous “assignations,” but that is hardly a crime – he loves her and that is cool with me, if he disses her and makes her miserable and adds insult to injury by filing for separation? Well, then I look for a collins or an M-16 and declare hunting season open! 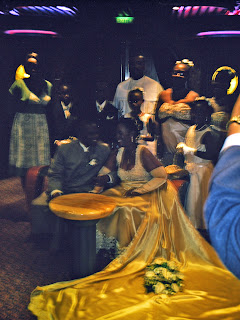 Seriously, wait – was I joking? Aw, as jdid would say “Doan Mind Me“, anyway – on January 9th they finally decided to make their union permanent. It is a very clever wedding and this is the reason why I am making this feature a Two Parter; many Bajans seem to be getting married on a cruise ship – but that’s the other story! 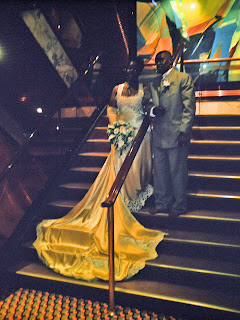 Stephen wore a dapper light olive/gray mandarin suit and Yvette’s gown was a creamy gold with two detached long glove-sleeves (no fingers so as to let the hand be free, sure there’s a name for it) and the train could unclip from the back of the dress. This was designed by Deborah Cadogan, Yvette’s partner in crime and pal from since Queen’s College days. 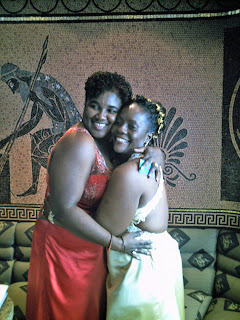 Neither the bride nor groom were late, in fact they were clever making sure the guests arrived on time, they told us get to the Port by 11:30 am but the wedding never started until two! I got there at noon ready to have ten heart attacks thinking I was late and there I was boarding in a queue behind the groom!! 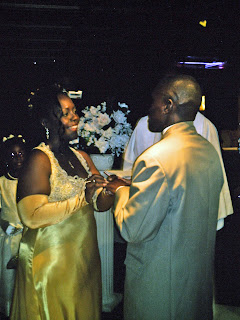 The whole ceremony was a very traditional scene – Mendelssohn and tossed gold petals, ring bearers and two candles into one flame plus the presiding father asking if anyone objects (nearly gave Deborah a fit when I said to her that if she open her mouth at that part I would kill her, what a guffaw) speak now or, etc. 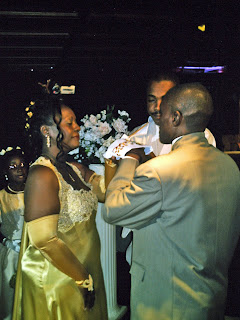 As the ceremony concluded with the official binding (so glad Yvette has her braces off, she never needed them in the first place to my mind, I sooner need them – but I am not spending my loot that way), then a friend of the Griffiths by name of Charles played on his guitar and sang a song I think was done by John Denver – it was about where you go, I follow and of course appropriate for the day. 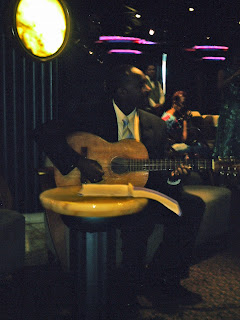 Yvette’s youngest sis, Marie, spoke so did a few others and then it was time for the fancy horse-doovers and rare fruits to be served with champagne or ginger ale as preferred. Ppl signed a wedding portrait with gold ink pens and I had to be silly – if they are blessed with a boy or girl to please call the child “Ian“, lol! 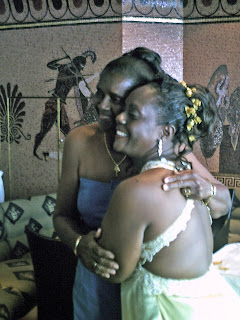 During reception a lot of good 80’s disco and calypso played and then ppl stretched the time by taking shots of family and friends, but we all had to go (not before I was the only person to get a shot of vodka with cranberry; all were jealous, I said you should just ask – like me), and Yvette started to get all misty eyed, but this time she has her hubby, family & friends who will continue to be here for her!