What to do for Christmas Shopping – Bajan Reporter suggests a book, cd or painting (Shameless Plug)

2007’s days are numbered (our 1st anniversary looms, yikes) and some of us are yet to spend our last shekel to get a gift celebrating the birth of one of God’s Messengers (Here you thought Christmas was all about guys in red and white and snow even in tropics?)… 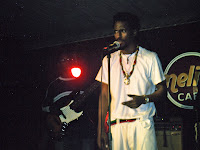 Well, for those who wish to stay Bajan and reasonable – you have two choices! A spoken-word disk or an anthology.

For those into audio, try “Random Acts of Conscience” from adrian green -aka- Amenyama, this 15-track album features many popular verses from this modern-day Aesop turned Orpheus… 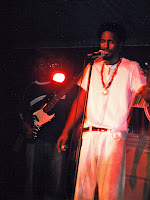 Unfortunately, you won’t find Rebel Diva nor Ancestors on this compilation! I am not sure where you would find a copy of the album, but I do know that you can e-mail Adrian “Amenyama” Green and arrange to get some for your friends and family as the disk is very cleverly priced! 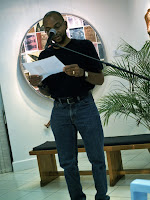 Also at a reasonable price is Bazaar from WritersInk, the group held their launch at the Zemicon Gallery over the weekend to mixed blessings…

In this sense, the performances were superb, but the printers never shipped the books for that night! Luckily, the authors who were there either had their own works or some galley sheets of Bazaar available. 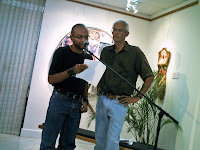 he regaled the intimate crowd on an all too familiar encounter of a vendor in Jamaica with a visitor, entices to buy and insults when nothing is sold – yet starts to seduce all over again when another tourist passes by. Taximen and coconut vendors are all too guilty of that here in Barbados as well. 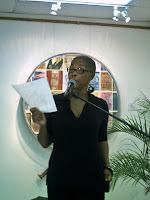 Robert Sandiford tersely recounted the eerie trials of detective Delvecchio solving a Montreal suicide or murder, the tale was called the “Hours In Between,” and then – there was Esther Phillips.

Esther to me was very laconic and didactic – as opposed to the others who’d give a story behind the story of their excerpts, she’d give a detailed treatise on why a given piece was structured the way it was – this kind of left me high & dry.

She also had her usual diatribe against her father and a poem about a Caribbean bogeyman conveyed in an esoteric European format. 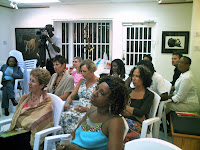 She said let me read a final poem, three times! What a curtain call, self-induced, huh.

But la piece de resistance was 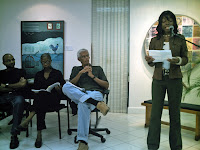 Kelly Chase who remembered her grandmother’s fear of the colour black and for the old lady, red and purple were colours of protection – the humour lay in how it affected Kelly’s teendom.

So, be sure and make sure to e-mail either Robert, Esther or Linda Deane for your copy of Bazaar – with 15 authors there’s more than one way to slake your literary appetite! 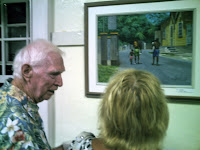 If your gift-receiver is more of an arty lot and has refined tastes, then you have until Thursday to zip over with your chequebook to the Main Guard and check out Virgil Broodhagen‘s work, set alongside his father’s work for the 37th time in a row!

I was particularly enamoured of “Under The Coconut Tree” and “Fathers” the first showing the ultimate in relaxation for the Caribbean and the second showing males bonding with their babies after a sea bath.

The debut for Virgil & Karl’s works was like a Hollywood debut – waiters and waitresses with trays of Gin, vodka and rum or Coke, Sprite and Juice accessorised with mini-pizzas, fishcakes & dip, or fish-sticks. 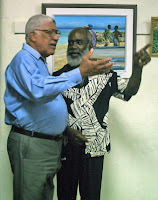 Many prominent white and black Barbadians were there – as well as the latest Chinese ambassador and former Chief Of Staff Rudyard Lewis also attended.

such as “At The Water’s Edge” where one of the fishermen looks as though he’s pondering what is keeping Theophilus from heading out while the tide is right?

A very grim and realistic “Gloomy Day” shows a trio of women wondering if they should really earn a dollar or say them have bad feels and go along about their business?

Then there is the rather humourous “Helping The Men” where it seems there is this young gal who is standing close to a group of fellows trying to launch a vessel, but she’s doing nothing but to apparently talk a roll of nonsense as they naturally start to lose their cool.

Many folks attested to the life, colouring and detailed shadows pervading the artwork. If you really want to impress? Then this upscale gift is the tonic to deliver this Yuletide.