After only six months since its spectacular firework opening party, Peter de Savary’s Mount Cinnamon Resort and Savvy’s restaurant are delighted with the success and patronage of the restaurant and property.

Whilst the 21 luxury villa and hacienda apartments will be made available to the general public for rental as hotel suites from March 1st 2008, the restaurant is enjoying great success with tourists and locals alike. Already a number of prominent Grenadian companies have booked their Corporate Christmas celebrations at Savvy’s restaurant.

One of the unique points of Mount Cinnamon is that every one of the 45 staff of the resort is Grenadian including Manager Chris Ghita. Unlike many other restaurants which hire foreign chefs, Savvy’s entire kitchen team is Grenadian. 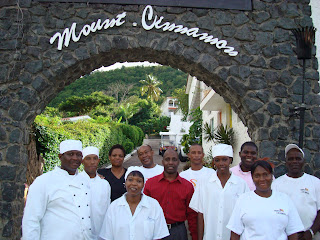 The management of Savvy’s took a conscious decision to train local talented chefs. Some of the best executive Chefs from Italy and France came to Grenada to conduct this training. Our local team is now running the restaurant without any foreign assistance and presenting results way beyond the expectations of all.

Peter de Savary also announced that 17 of the 21 units at Mount Cinnamon are already under contract and he anticipates that by year end all units will have been sold. Mount Cinnamon welcomes interested guests, visitors and potential buyers, please call (473) 439-9900 to arrange a tour or (473) 43-SAVVY for the Savvy’s Restaurant.