The Stanford 20/20 Pro Teams have been launched in St Lucia, Anguilla and Nevis and St Lucia head coach Roger Harper hailed the initiative as an ideal starting point to engineer the re-emergence of West Indies cricket.

Former West Indies all rounder and head coach Roger Harper is of the view that professionalism is desperately needed in West Indies cricket. 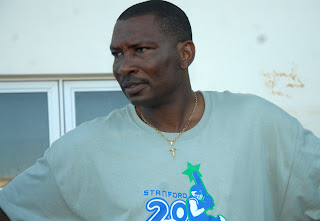 Speaking on the launch of the Stanford 20/20 St Lucia Pro Team, for which Harper is the new head coach, the 44 year old said that professionalism and discipline need to be instilled in the initial stages of players careers.

?One of the weaknesses in the West Indies is our lack of true professionalism and in order to develop that at the international level you have to inculcate it at the lower levels in the territories and that is a point that most people miss when we speak about West Indies cricket,? Harper pointed out.

?The challenge is to teach players professionalism and if we can do that in the territories then our performances will rise, that discipline that comes with professionalism will be a tremendous benefit,? reasoned the award winning former captain of Guyana.

The former Hampshire fast bowler was speaking on the activation of the Stanford 20/20 Anguilla Pro Team. Anguilla is the second team to become ?pro? following Antigua.

Connor said in his estimation the Stanford Pro Team is the best possible injection Anguilla?s cricket could receive at this juncture.