Got an e-card from Ocean Park, considering the big war four months ago involving my allies Pull-Push and Underground – I figured that company would want to send me a lump of coal! They sorta came close… 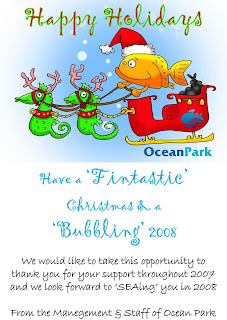 This is despite the fact that I removed the offending item, and they in turn did a whole pile of PR offering free tickets every weekend on Love-FM and even went looking for a Maintenance Mgr which they should have done from the start rather than forcing Barbados Underground to reveal one of their many mortality reports that many bloggers apart from myself have kept in storage in case of any further legal wranglings…

That was Monday, then early this morning? Here goes –

Trish White (Ocean Park) would like to recall the message, “Merry Christmas“.

No explanation given, just to recall it, an e-mail, how? Moreso – WHY?

You’re a mean one, Mr. Grinch.
You really are a heel.
You’re as cuddly as a cactus,
You’re as charming as an eel.
Mr. Grinch.

You’re a bad banana
With a greasy black peel.

You’re a monster, Mr. Grinch.
Your heart’s an empty hole.
Your brain is full of spiders,
You’ve got garlic in your soul.
Mr. Grinch.

I wouldn’t touch you, with a
thirty-nine-and-a-half foot pole.

You’re a vile one, Mr. Grinch.
You have termites in your smile.
You have all the tender sweetness
Of a seasick crocodile.
Mr. Grinch.

Given the choice between the two of you
I’d take the seasick crocodile.

You’re a foul one, Mr. Grinch.
You’re a nasty, wasty skunk.
Your heart is full of unwashed socks
Your soul is full of gunk.
Mr. Grinch.

The three words that best describe you,
are, and I quote: “Stink. Stank. Stunk.“

Your soul is an appalling dump heap overflowing
with the most disgraceful assortment of deplorable
rubbish imaginable,
Mangled up in tangled up knots.

You nauseate me, Mr. Grinch.
With a nauseous super-naus.
You’re a crooked jerky jockey
And you drive a crooked horse.
Mr. Grinch.