Keshia Lorde (Sister of Bernard) walked away with the coveted President’s award over the weekend.

The young Bajan is also a third degree black belt in taekwondo; she is a Milliken Mills High graduate, where she was an honour roll student every semester.

She won awards in Spanish, media studies and English, plus two Alliance of Educators for Black Students awards.

Keshia played on the girls? field hockey team, acted as secretary for the school?s Stephen Lewis Foundation group and volunteers with Habitat for Humanity, the Heart and Stroke Foundation and York Children?s Water Festival.

She is studying international development at the University of Guelph [Ed’s Note – When does she breathe? Wow, what a schedule!]. 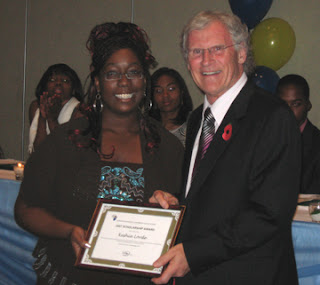 Keshia receiving the President’s award from Director of Education of the York Region District School Board, Mr Bill Hogarth.