Not surprisingly during this season of cheer and goodwill, St Kitt’s Racing and Gaming Services (RGS) recently donated a variety of articles to the children receiving medical care at the Paediatric Ward at the Joseph N. France (JNF) General Hospital.

The easily afforded gifts by this affluent sector included toys, baskets of baby items and sleepers were presented by Mr. Dion Benjamin, an RGS Supervisor and a Representative of the Social Committee. Benjamin said it was the committee?s desire to bring holiday cheer to the children receiving medical attention at the JNF Hospital. He elaborated if the presents brought a smile to one little face, then the committee would know that its activities were not in vain {Ed’s Note – Who knows, perhaps a new generation of gamers could be generated too}. Benjamin also took the opportunity to encourage other donors to come forward. 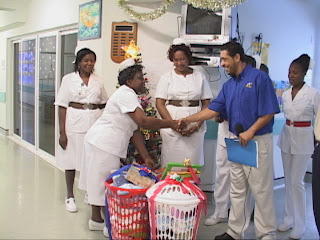 Assistant Matron Ms. Rita Isaac accepted on behalf of JNF. She said she’d been contacted two months earlier by RGS enquiring as to what Paediatric’s needed. She said she was glad to see they finally followed through with the actual donation, because similar requests were made in the past, but to no avail.

The Assistant Matron thanked Mr. Benjamin noting although this was the first RGS donation to JNF, she hoped it would not be their last {Ed’s Note – RGS can afford it, their coffers should be bursting at the seams, right?}.

Earlier this year when RGS donated 18 computers to the Ministry of Education, Manager Andy D’Andrea said his organization was committed to social development and education in the Federation. Over the last two years RGS has donated to various entities including the Ministry of Social and Community Development, schools, sporting clubs and dance theatres {Ed’s Note – Ah, tax write-off’s don’t you just love ’em to pieces?}.