At the launch Noelle Nicolls, Director of Island Stubs, gave a visual demonstration of how the site works. She emphasized its easy to use system and how the site cuts the time for buying tickets. Users can use PayPal, International credit cards or Jamaican dual currency credit cards. 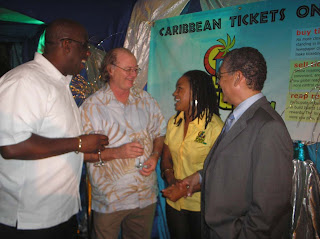 Noelle also announced that Supreme Promotions has now joined up with Island Stubs to sell tickets online for the 24 th staging of Guinness Sting.

Howard McIntosh, Director of Supreme Promotions is very excited about the new method, “Last year, Guinness Sting had a crowd of 35,000. This year, with the help of Island Stubs we may get a little closer to our goal of 45,000 patrons.”

Island Stubs reported that they have sold over US$10,000 worth of tickets within the 1st week of selling tickets for the Air Jamaica Jazz & Blues festival.

Walter Elmore of Turn Key Productions pointed out that individual promoters are able to access sales data for their events, which will enable them to directly market to their clients for future events.

Islandstubs.com is now selling tickets online for both Guinness Sting 07 and the Air Jamaica Jazz & Blues festival 08. Noelle envisions that Island Stubs will be selling tickets globally for ALL major Caribbean events in the near future.