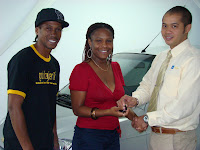 is the grand prize winner of a Chevy Spark compliments of Warrens Motors from Lil Rick’s B’day Party at Tim’s.

Ms. Stuart said she casually checked her ticket after a few days, not expecting she won anything. She was so astonished to discover that her ticket numbers matched those of the drawn winning ticket.

The event was held at Tim?s on the highway on November 24th 2007. Other prizes won were high end cellular phones compliments of Cable & Wireless, 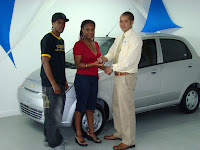 gift vouchers from Head Over Heels Boutique and a number of admission tickets for the Jah Cure show.

Some of the local entertainers host birthday parties and are known to offer prizes including appliances and electronic items, but this is the first time that a car has been presented as a grand prize.