Art For Export: Why were so many Barbadians pissed off?

Both Zemicon and Bagnall’s Point are focal areas with Barbadian works sent overseas for exposure, at least up December 7 – but it appears the responses have not been as favourable as expected.

The Brooklyn Museum’s Infinite Island which is running ’til early next year came under various scrutinies and the comments from untried and veteran critics in this arena have ruffled the collective feathers of the Barbadian Art Community – both curators and artists.

The catalogue for the viewing has various answers – based off of a questionnaire provided by Art For Export’s curator Therese Hadchity. Let’s observe some of the comments and attempt to answer the quiz ourselves with a couple of our own googlies in store!

Now Holland Cotter to me does not really insult the show “Infinite Island,” he sees it as a large undertaking for a largely unappreciative audience who feels they are the Mecca for what is or is not art. 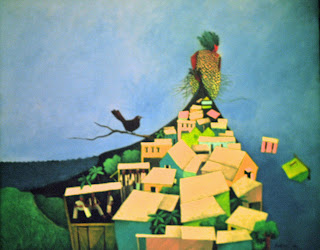 …the thematic approach – so redolent of the erstwhile avant garde – accentuates the inherent tiredness of much of the art itself.

Quisqueya Henr?quez, a Cuban artist who lives in the Dominican Republic, bluntly points out that – surprise! – the Caribbean fantasy of a palm-treed Eden doesn’t jibe with reality. Her photographic diptychs present a bifurcated world seen through the lenses of a pair of aqua-tinted glasses. One eye takes in a homeless man surrounded by his possessions. The other sees a ship cruising on the horizon. This piece has neither the subtlety required of good art, nor the incisiveness of effective protest.

The show contains far too much of such flabby politics. Terry Boddy, of Nevis, likes to manipulate the sadly familiar plan of a horrifically overcrowded cargo slave ship, taking advantage of its inherently shocking imagery to prop up his teetering concepts.

He’s not the only artist to use slave-ship imagery. The Jamaican-born Charles Campbell stamps oversized images of the middle passage into decorative patterns on the museum’s walls. Both of these artists exploit past exploitation and in the process, trivialize it. 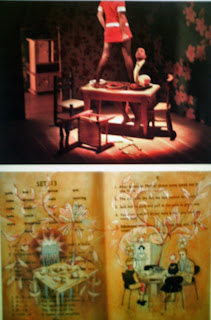 I do realise there is a certain trend in all of the items referred to in the National Art Gallery Committee catalogue, but I am not revealing it – only to hint something is missing and is only apparent here.

Coming and going, Eden and its seamy underbelly: These paradoxical themes occupy most of the artists in this uneven though consistently engaging survey. Some see the Caribbean as a troubled paradise, others as a piquant hybrid of cultures and classes, languages and places. Playing on what a tourist might notice (or not), Quisqueya Henr?quez, a Cuban artist residing in the Dominican Republic, displays green-tinted photo diptychs juxtaposing views through the two lenses of a pair of sunglasses: in the left one, a dog asleep under a bench; in the right, a homeless man passed out on the sidewalk. But hers is perhaps an overly literal approach to social and economic problems that will surprise no one.

The missing element continues to be on the run in these critiques which had Barbados’ Literati-esque courtiers all abuzz; before we reveal it? A look at comments from the New York Sun –

Joscelyn Gardner’s series “Creole Portraits” (2002?03), 10 lithographs on frosted Mylar, also deal subtly with slavery. The black-and-white prints, isolated black women’s hairdos seen from behind, float beautifully on the page like Ernst Haeckel’s illustrations of seedpods or crustaceans. It is only upon close inspection that the braided creatures resemble heads, or that you realize that they contain shackles, cuffs, balls, and chains. 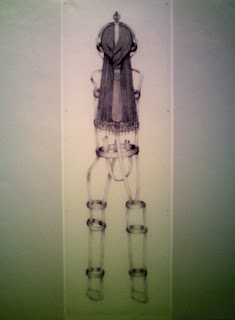 Anyone who has been to the Caribbean ? walked its powder sugar soft beaches and swam in its turquoise water ? knows that it is a tropical paradise. Yet “Infinite Island” contains few works celebrating the Caribbean’s beauty. Those that do ? such as Ms. Gardner’s “Creole Portraits,” Keisha Castello’s inventive creations “Hybrid Realities” (2005), a series of small handmade creatures mounted in black boxes, and Ibrahim Miranda’s mixed-media series “Island Night: Metamorphosis” (2004?06) ? feel refreshingly out of place.

There it is – the missing element! Of four reviews of this Brooklyn Museum event, only Lance Esplund mentioned Barbados – worse, in a neutral tone, not even faint praise nor heavy damning! For me, I suspect this is what has angered most of the people who sent lengthy theorems and treatises to be included in the Art For Export catalogue – they feel they should decide what qualifies as Caribbean Art and its future abroad in its own right. 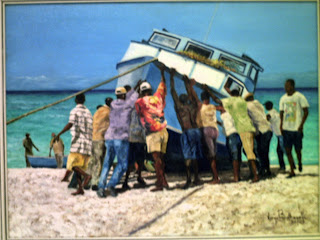 Here are some of the pieces of responses found in the NAGC’s catalogue, first? Virgil Broodhagen who zeroes in on the old adage, PLEASE YOURSELF FIRST –

“Artists must develop confidence in themselves and what they produce. They should not produce in an effort to please critics. A thousand critics are all likely to differ in their views. Therefore, who do we please and when?”

“The picture itself has its own logic and makes its own demands. So communication must be between the artist and the work. No audience save oneself is important.”

“It is time that ‘Caribbean Exhibitions‘ be curated by Caribbean curators, who are familiar with Caribbean peoples and their culture, or at least be jointly curated with other (international) curators.”

For me most of the other answers are really too long-winded to retain any form of valid pithiness even if it was necessary in the first place. But The Bajan Reporter took a look at the questions to see if we can add a layman’s perspective… 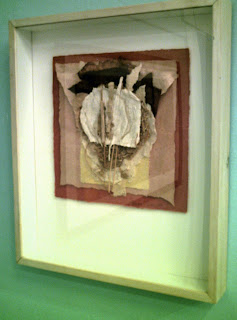 1] Do the observations expressed by the four reviewers resonate with some of your own perceptions? Yes – I do think the slave motif has been overdone, it happened and it was awful but we cannot keep at this self-flagellation for the rest of time! If reparations were to come about by compelling art, what do I do? As a mixed person – do I say sorry to me for enslaving some of my own ancestors? How do I offer compensation when the money is simply transferring from one pocket to the next? Life goes on and so do we, the Caribbean has idyllic moments and it also has idiosyncratic ones as well – deal with it!

Question two is inapplicable to me while number three is too wordy – I’ll answer it, but let me simplify… Protest Art from the Caribbean could object to better issues than what it usually chooses – stop old folk from spending their last fifty at a slots arcade; if a man owns a PR firm and is chair to a Government entertainment board is that not a conflict? Choose one or the other, brother! Why don’t regional Heads really look after the melding of agriculture and housing rather than set these two branches to be at war with each other? Food and dwellings have to co-exist! I could really go on in advising artists to look for new topics to protest against…

Four, Five and Six again seem geared to the Bajan Literati, and I leave them right where they are… But the seventh question is interesting!

7] Are major surveys of Caribbean Art such as “Infinite Island,” useful for the growth of art & culture in the region itself?

Yes – any publicity is good publicity! Our works regardless of manner are being brought to the attention of an overseas market which can be a stepping stone for the Global Village. If there is anything worthwhile in what a critic says and we must be cruelly honest over that, even if only to ourselves, then we need to act or remedy the situation accordingly for future instances or opportunities.

8] Does it make sense to you to think of art in terms of regions or nationality?
Not that it makes sense, rather, it is human nature to classify accordingly – I can look at certain canvasses and be able to say this is one artist or another, or even to say this brush-stroke or sculpting method is typical for a certain part of the world; ppl even can read a passage or hear a piece of a brand new song and identify the singer or writer or who played guitar by this same form of pigeonholing! It also can apply to photography and there is nothing wrong with it at all!

The last two questions were structured for artists and curators respectively, but don’t take my word for it call the Zemicon Gallery or head over to Bagnall’s Point and double-check the hours, there’s only until the seventh of this month left!