UK wannabe performer resumes claim on heart of Barbadian singer Rihanna – why does this Fenty girl not jack him up?

For a few days we have been tracking the efforts of a UK entertainer in attempting to lay claim on the pulse, sweat, mobile-number and God knows what else of Rihanna – now, he’s decided to try and break it internationally – I dunno why, but unless she said YEAH, then I just can’t buy into it… So here’s the so-called news on the Bajan singer, watch out for used food chunks at the end of the item, ok?

Zedstar, UK-based but Italian-born, interviewed by R. Pastor on Fox TV, talks about his new projects and his private life revealing something interesting on the last news published on many magazines about a relationship with the beautiful Barbadian singer. 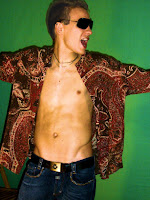 The anchor asked some questions about him and the last MTV Europe Music Awards before entering in the ?hot? side of the interview. Zedstar imagines himself to be a poet…

After your successful single ?Flying away? , are you working for another project?

Obviously! I can?t live without working on music. I’m working with my team to release my last song ?Let my hands wander down?. {Ed’s Note – Ye Gods, how tasteful, went to his website and my ears curled into themselves on protest immediately} We’re now shooting the video clip with a beautiful very young model, Poppy R. It’ll be ready in next weeks.

Did you feel hurt when you knew that your name isn’t in any list of the MTV Europe Music Awards?

No, not hurt. Of course I hoped to be in a list, but I’ve enjoyed myself like an invited too. It was a beautiful show. But I hope to be on the stage next year!

What do you think is the best between the winners?

I answer with just a name: Rihanna. [Pause for applause]

There are all great artists. And there are other great artists that I love, like Justin Timberlake, that haven’t won a prize.

But Rihanna is a step up.

And what about your private life? You’re on the pages of many magazines. So, what’s the truth about you and Rihanna?

We’re followed each day by photographers and paparazzi. We need our private hours too.

However I can just say that since when I worked with Rihanna one year ago for the feating version of Unfaithful, I remained really impressed about her. It was wonderful. She’s so beautiful, and her voice is warm and passionate even when she talks to the phone. She’s a lovable girl. Her eyes show the sweetness that she has when talks with everyone. She’s simply fantastic. That’s why she has so many fans all over the world.

However – we’re in touch, we have some common interests. Do you know that she loves videogames? I can say there’s a good feeling.

But I want everyone to remember that in gossip magazines appears fake news many times {Ed’s Note again – No Bloody Comment}.

I’m sure that in this moment her heart is beating for someone, but I can’t say anymore about it. {Ed’s Note FINAL – BaaaRRRfffFFF!}