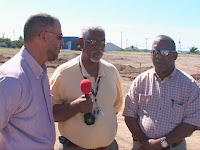 The 2008 CARIFTA Games are a little less than four months away in St. Kitts and Nevis. Construction crews have been working steadily over the past months to ensure the Bird Rock Athletic Stadium ? which will host the Easter-weekend tournament ? is completed on time.

A thumbs up signal was given to the construction crew at the Bird Rock Athletic Stadium as work on the Class 2 Track and Field facility continues apace.

Minister of State responsible for Sport the Hon. Richard Skerritt headed a delegation of government officials and representatives from the Local Organizing Committee of CARIFTA at a site visit recently. 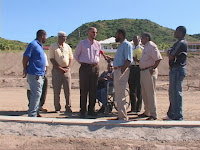 The drainage system is virtually complete, the main stand frame is erected, and grassing is about to commence. These and other developments coupled with the commitment of the contractors to work through the Christmas and Carnival season suggest that the project will be completed on time.

Minister Skerritt explained that this development much like Warner Park demonstrates the strong commitment of government to facilitate positive growth experiences for young people. He noted that the redevelopment project of Warner Park and the Bird Rock Athletic Stadium is the result of a fruitful partnership between the Governments of Taiwan and St. Kitts and Nevis.

?Taiwan has made a tremendous input,? the Minister of State stressed, noting that the sum total of the grant is approximately US $14 million given over a three year time span. He added that his government is investing US $8 million into the redevelopment project which included the upgrade to the cricket stadium, renovation of the football stadium and the ongoing construction of the athletic stadium. 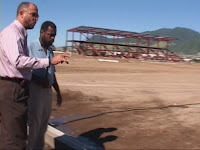 With the influx of visitors from this and other sports-tourism related events taking place in March and April next year, the opportunity for locals to offer accommodations has once again emerged, much like it did last March during the ICC Cricket World Cup.

Minister Skerritt encouraged persons interested in hosting guests to contact the LOC. He stressed that much like the CWC, partnerships, will be the foundation for successful CARIFTA Games in 2008.