At a press conference earlier today at Government Headquarters, Kittitian Minister of Industry, Commerce and Consumer Affairs Dr. Timothy Harris said the price control initiative is a direct intervention by Government to protect consumers and small businesses from the spiraling costs of goods, and to achieve a level of moderation in the cost of living. 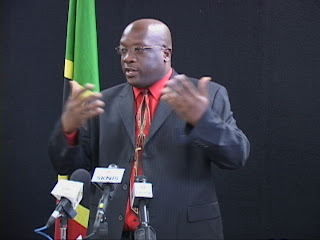 ?We empathize with the public concern,? the Minister stressed. ?We are aware that the inflationary trajectory of prices is partly caused by imported inflation since we import almost all that we consume.

?The Government, however, is concerned about the diminishing purchasing power of pensioners on fixed incomes, our workers on the Industrial Estate, our domestic workers and other categories of fixed income earners who continue to see their hard earn dollars stretched each week.?

Although prices cannot be legally marked up higher than that listed in the Statutory Rules and Orders (SRO), distributors are encouraged to offer the goods at a lower price.

?The markups proposed here are very reasonable and in some cases [were] proposed by the Chamber of Industry of Commerce, [while] in other cases they are lower,? Minister Harris said, adding that the final decisions were made after extensive research, debates and consultations with businesses and residents.

The Minister of Industry, Commerce and Consumer Affairs said the matter of inflation is a national concern and government was careful in considering all factors when making a decision. He cited recent discussions with bakers – who recently sought to raise the price of bread and other baked goods, due to the increase in the cost of flour overseas – in emphasizing this point.

?The bakers were saying that ? flour is an important ingredient, but the price of butter has moved significantly [higher] and this is a [concern] for [them],? Minister Harris stated.

?We had a wide acceptance of the view that the prices were moving too rapidly and too frequently and that concern I think, is one that is accepted by the Chamber itself since the membership in their individual capacities representing their own businesses have basically made that point to the Government,? he stressed.

Price Inspectors and other agents from the Ministry will visit various businesses throughout St. Kitts after the SROs are made available, to ensure that the laws of the land are not being violated. Minister Harris encouraged consumers to be vigilant and become familiar with the list of protected goods and their ceiling prices in order to make informed decisions.